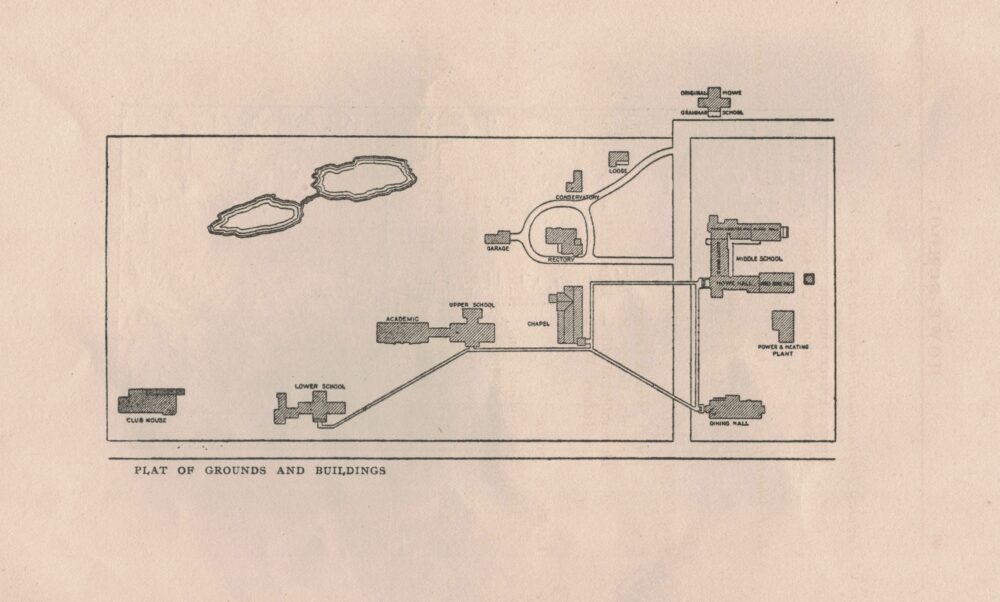 This plat of the Howe Military School campus appeared in the 1919 catalog, but it dates prior to 1914 as it doesn’t show the Mothers’ Chapel addition as the south transept of St. James Chapel which was built in 1914. The building labelled “Lower School” later became the first Administration Building, after the first White Hall was built by adding a gymnasium wing to the east and a dormitory wing to the south of the Club House during the 1920s.

Notice that The Vicarage is labeled, “Original Home of Howe School.” This Greek revival structure was the home John Badlam Howe built for his wife in 1842. After his death, his widow, Frances Marie Glidden Howe, and his half-brother, James Howe, met with the third Episcopal Bishop of Indiana, The Right Reverend David Buell Knickerbacker, to carry out John B. Howe’s bequest of $10,000 to establish a school for boys which they named Howe Grammar School.

Bishop Knickerbacker hired The Reverend Dr. Charles Nelson Spaulding as the first Rector of the School. John Howe had also given $10,000 to St. Mark’s Parish for a new church. When the 1885 St. Mark’s was completed, the 1852 St. Mark’s building was moved to the west side of an existing farmhouse which was named Knickerbacker Hall. The relocated church building was called St. Mark’s Cloister. A covered walkway was built along the south side of it. The north half of the west portion of the Quad labelled “Howe Hall” was then added. The intention was to house 50 boys.

In 1895, The Reverend John Heyward McKenzie was hired as Rector. James Howe gave $10,000 to extend Howe Hall to the south, the portion labeled James Howe Hall in the plat. That gift was given on Dr. McKenzie’s first Christmas at Howe. Dr. McKenzie had brought 50 boys with him from Culver; added to the “about thirty” already enrolled, the addition would enable accommodating a hundred. This information is from Dr. Clarence J. Blake’s address at the Founders’ Day 1915 observance of Dr. McKenzie’s twentieth anniversary as Rector. Dr. Blake and Percy Dwight, two early and long-time Trustees, were nephews of the Howes’.

The Right Reverend John Hazen White, D.D., who is buried in the St. James Crypt, describes his hiring of Dr. McKenzie in his address on the occasion of Dr. McKenzie’s twentieth anniversary as Rector:

“During the first weeks of my episcopate, God directed me to Lake Maxincuckee, where I found a young priest of the Church, with less of a school, if anything, than I found at Howe. His only building had been burned. He was living, with his boys, in tents. [20 years later] How much of [Dr. McKenzie’s] own means he has put into this work [Howe School], no one will ever know.” 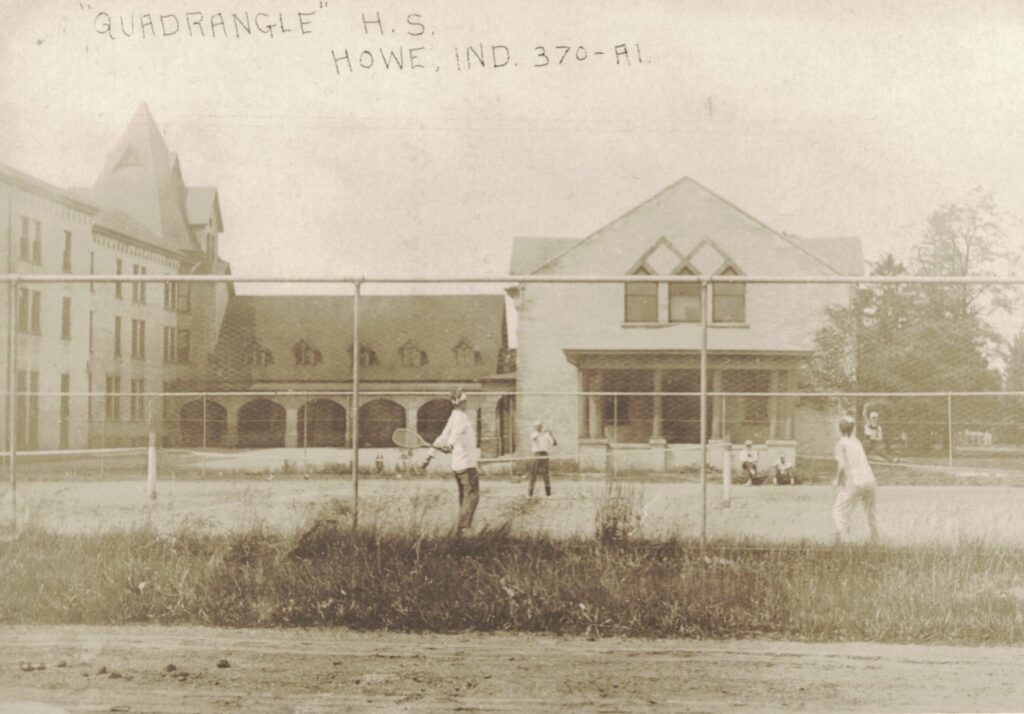 Here is a seldom-seen view of the Quad from the south.

Left to right: James Howe Hall (flat roof), gym in basement; the original Howe Hall (peaked roof and fourth-floor tower); across the north St. Mark’s Cloister, the original 1852 church building moved here after 1885, with the covered walkway later added across the south side; the three west dormers on the roof of St. Mark’s Cloister are cubicles of the Battalion Staff quarters, which occupied the west end of the second floor; next Knickerbacker Hall in the northeast corner, including part of the original farmhouse purchased by the Bishop in 1884, and finally at the south end of the east leg of the Quad, Blake Hall, built by Dr. Blake, showing the portico added on the south facade of Blake Hall. In the shade of the tree near the right edge of this photo, the Conservatory can be seen in the distance, east of the Rectory (Howe Mansion). 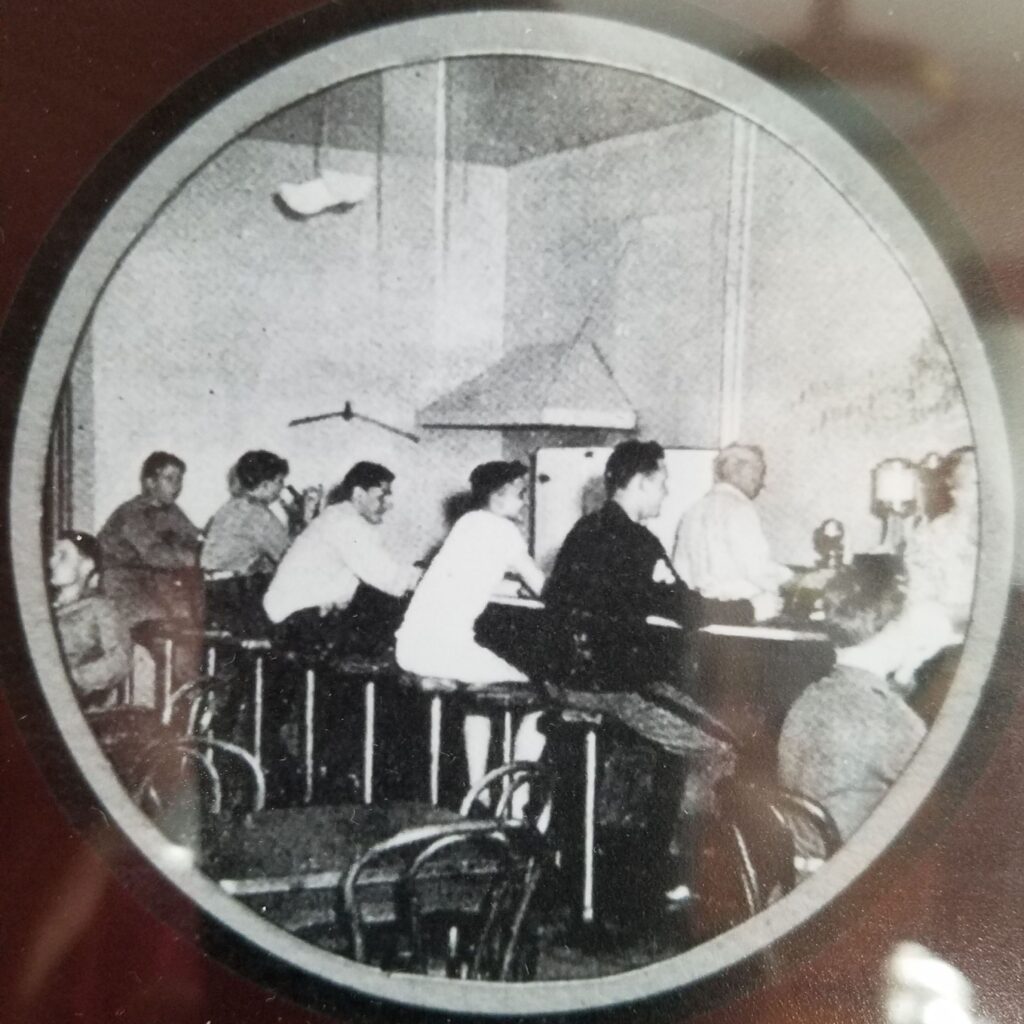 A picture seen in many Howe catalogs show the former study hall on the main floor of Howe Hall after its conversion to the Canteen, which was operated for many years by Bandmaster Cpt. Otho Ling and his wife. 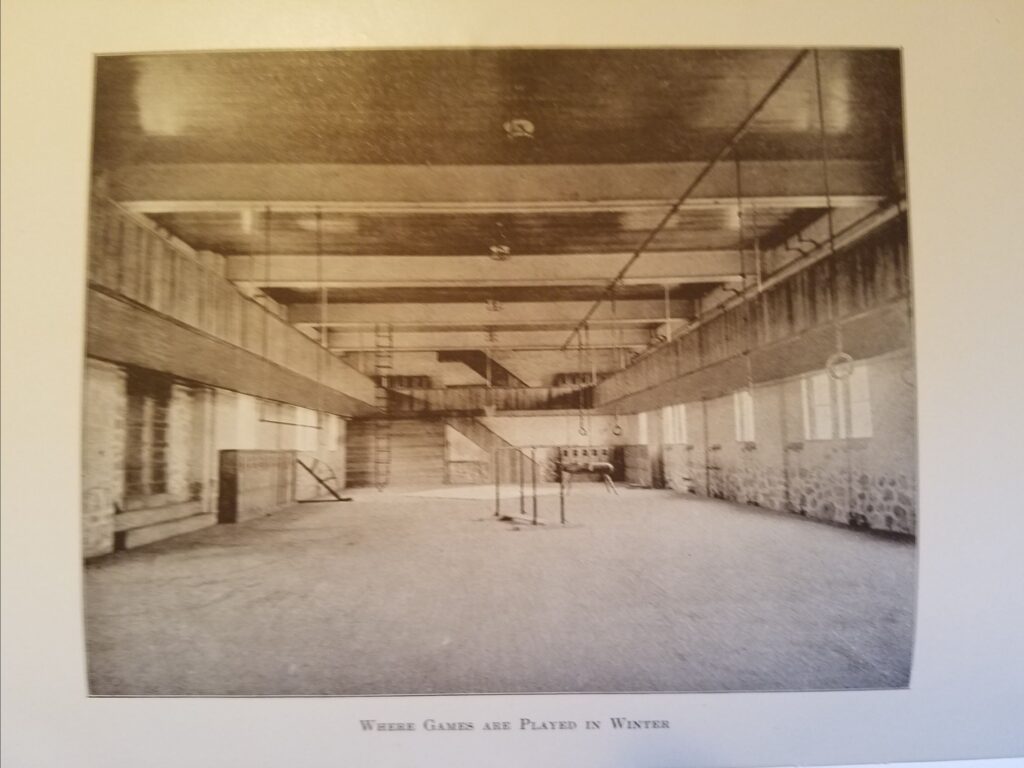 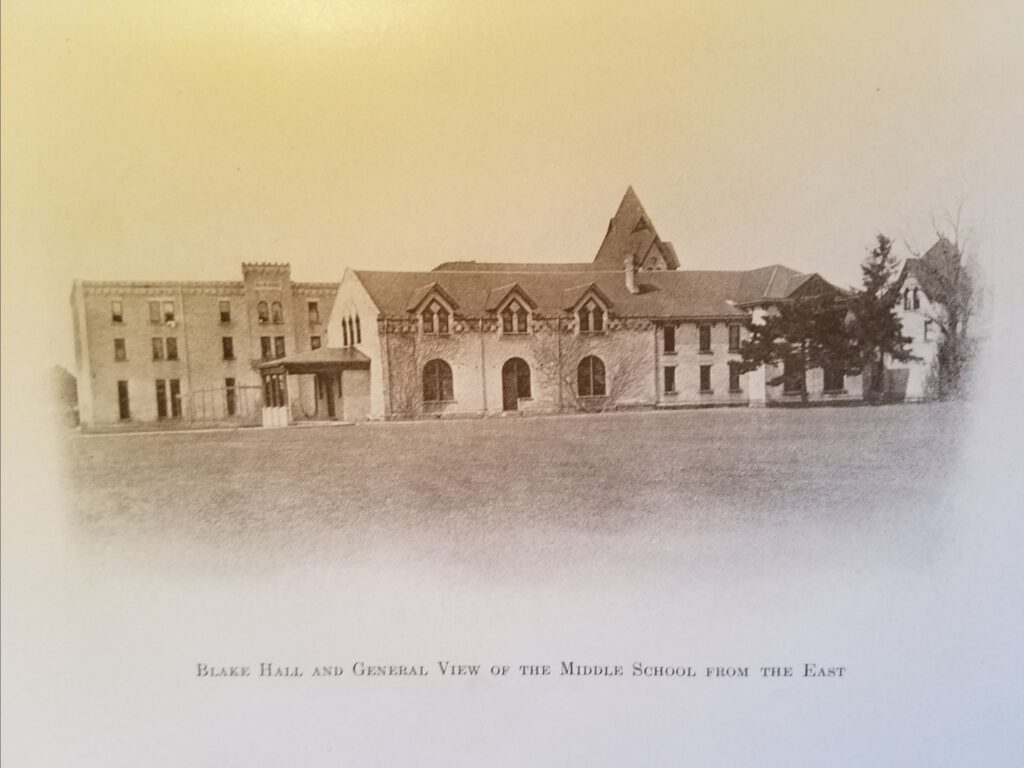 The Quad looking west from the early athletic field. 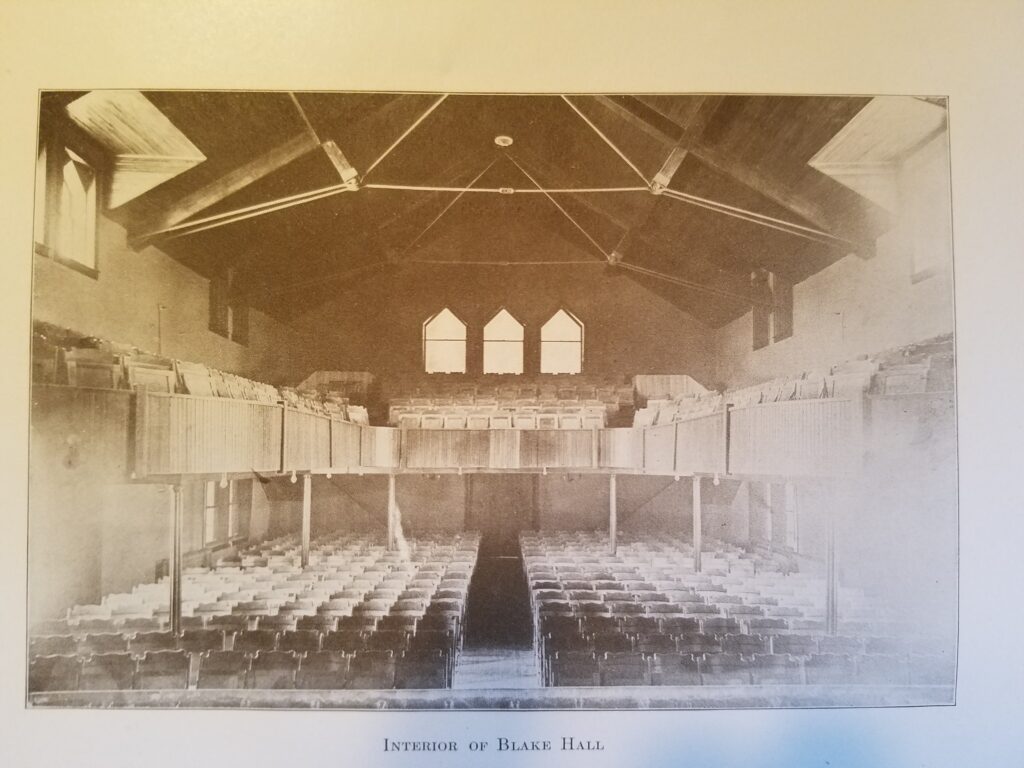 Blake Hall was originally the dining hall for meals, otherwise the study hall and recitation hall outside of meal hours. After the first McKenzie Hall was built north of St. James Chapel, Blake Hall was converted into the School auditorium. In the 1940 era a 35mm projector was installed in the balcony for the Friday Night Movie, a highlight of the Cadet week. 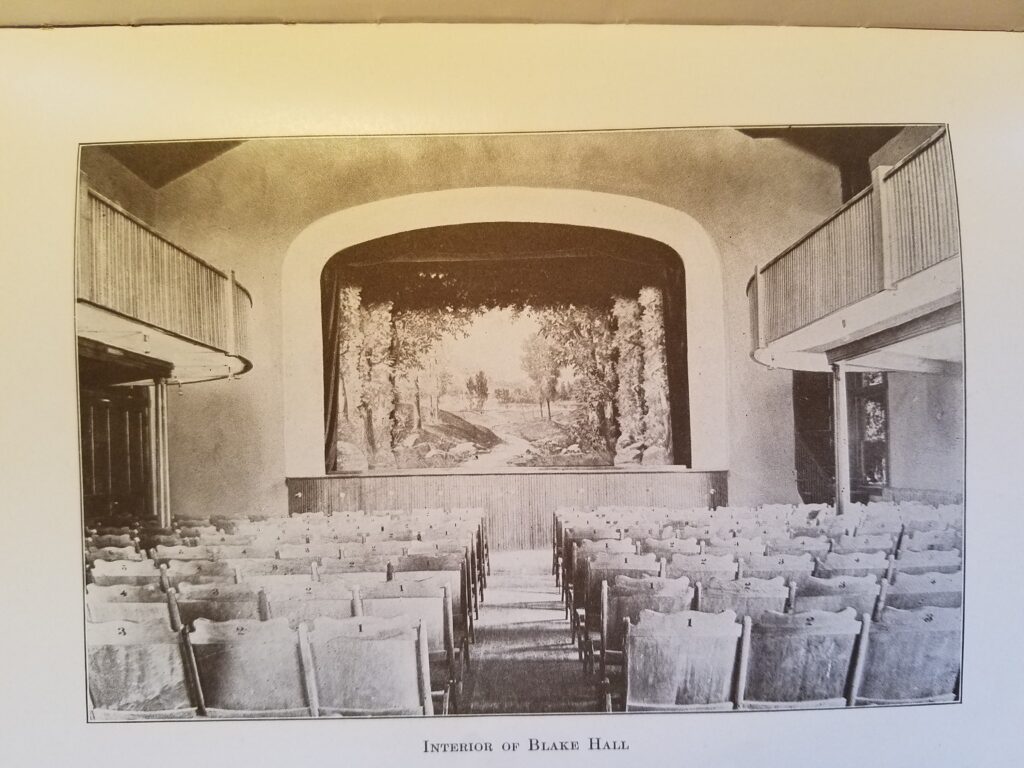 The stage in Blake Hall. This early photo shows the scenery which was proudly featured in catalogs of the era. The movie screen filled this view in later years. 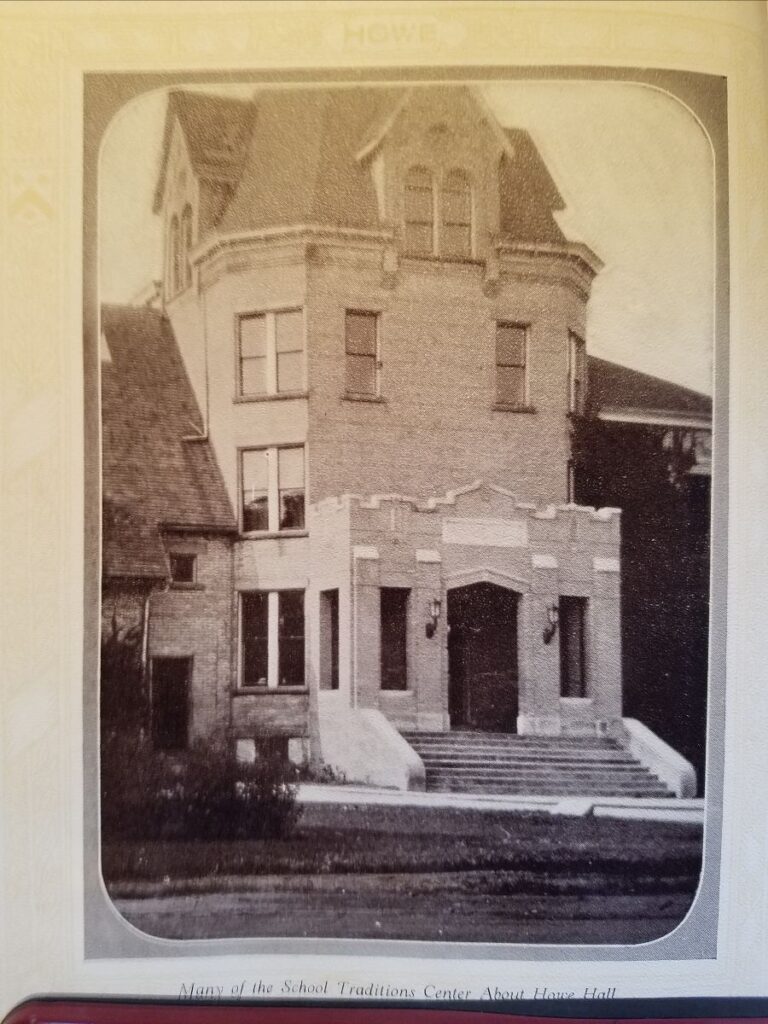 These steps were the stage for many group photographs for generations of Tatlers. The porch was added in the 1920s. To the left of the tower, you can see the break in the eave line between the original St. Mark’s building and Howe Hall. The doorway under this short eave was an all-weather open corridor to the “yard” of the Quad. B and C companies marched through here after forming up in the yard or in the Gym, depending on the weather, to go to meals or classes. The windows in the north wall of Howe Hall in the two stories above the porch are Tactical Officer apartments for B and C Companies. I don’t know what was in the tower (attic) room(s). 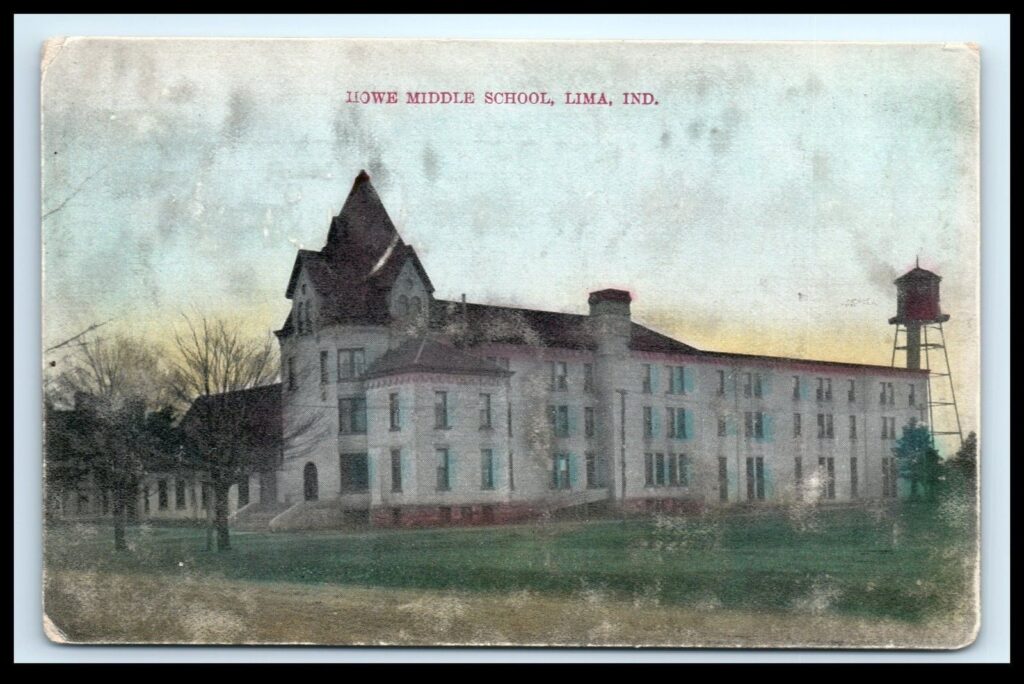 Here is picture of Howe Hall before the porch and west side fire escape were added. Nice detail of the north side of St. Mark’s Cloister. In the 1920s when the “new gym” was built, porches of the same yellow brick were added to Howe Hall, Gray Hall, and the first Administration Building. The Power Plant was built of this same brick. People who have never seen Howe sell postcards on E-Bay (r) with the brick colored red. 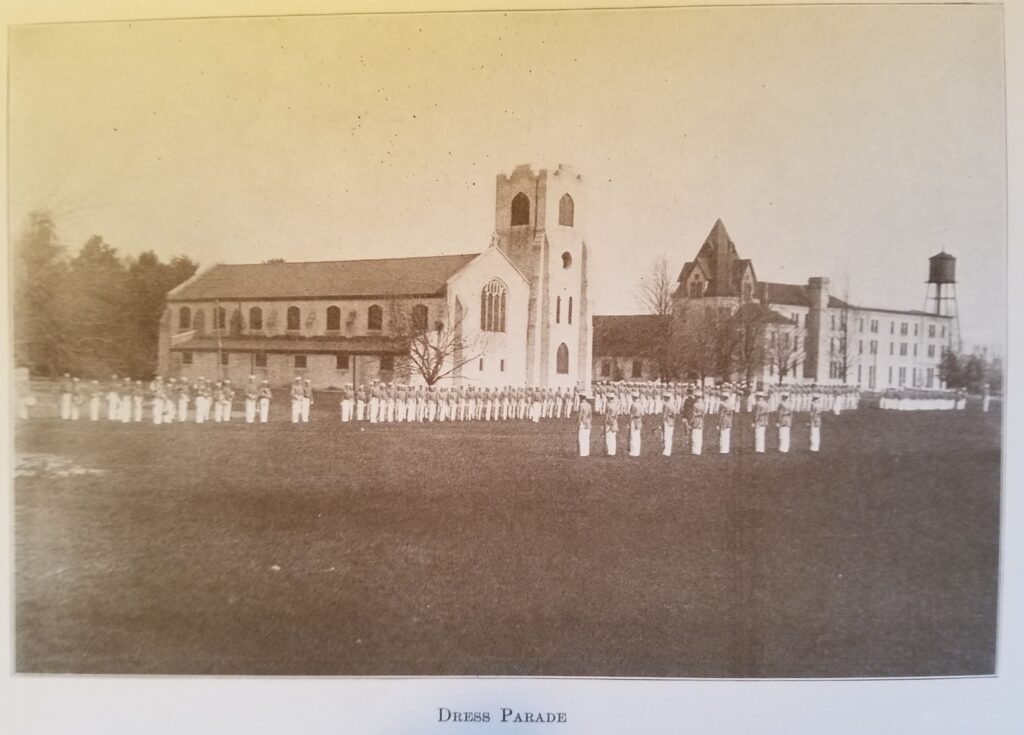 St. James Chapel and Howe Hall in about 1905, before the fire escape was installed on the west wall of Howe Hall. Notice that the sanctuary and north transept have not yet been added to the Chapel nor has the clock been installed in the tower. This view shows detail of Howe Hall and also gives a perspective of its location relative to the Chapel. The 1929 catalog contains a plat of the School showing “proposed natatorium” attached to the west side of James Howe Hall. That didn’t happen until 1953, when it was added to the north side of the “New Gym.” Other catalogs mention a swimming pool and rifle range somewhere in the quad. I never found them…. 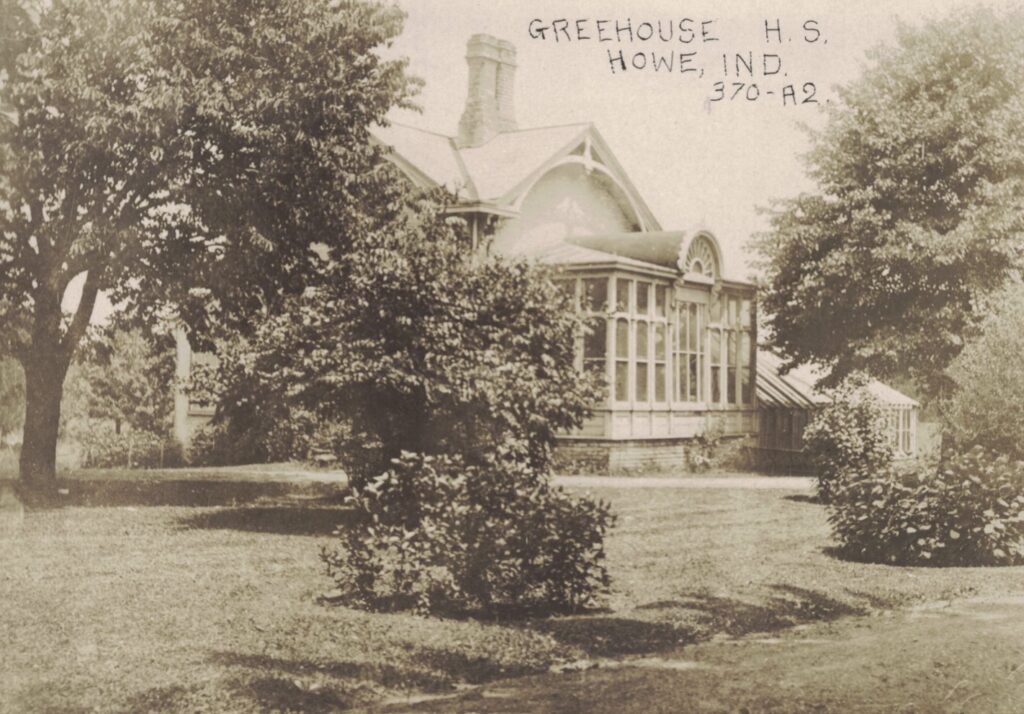 Late in the 19th century, there were no airlines or highways to bring flowers or vegetables from Florida or California to the cold north in winter. They had to be grown in a local greenhouse. Typically, lettuce and tomatoes were the veggie choice. A home conservatory was often part of a mansion’s grounds and the Howes enjoyed the finer things. Howe catalogs said fresh veggies were grown for Cadet meals. Given my forebears’ experience in the greenhouse vegetable business in Peoria, lllinois, I will point out that the greenhouse extending east from what is more of a sunroom than conservatory (due to the solid roof) is too small for growing enough to feed a hungry Corps, but maybe enough for a Mansion dinner. 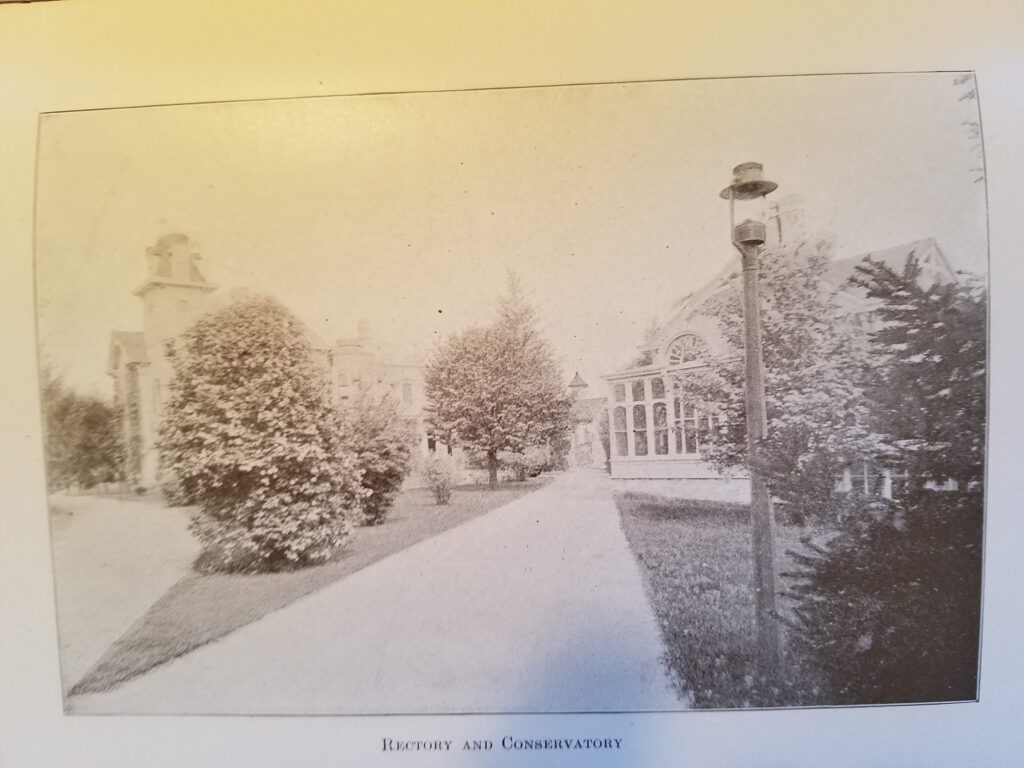 Looking northwest between the Rectory (former Mansion) and the Conservatory, we see a large chimney in the Conservatory service building (“potting shed”) separating the ‘sunroom” from the greenhouse. Howe alums all know about Howe winters; the greenhouse would have been a heating challenge there. 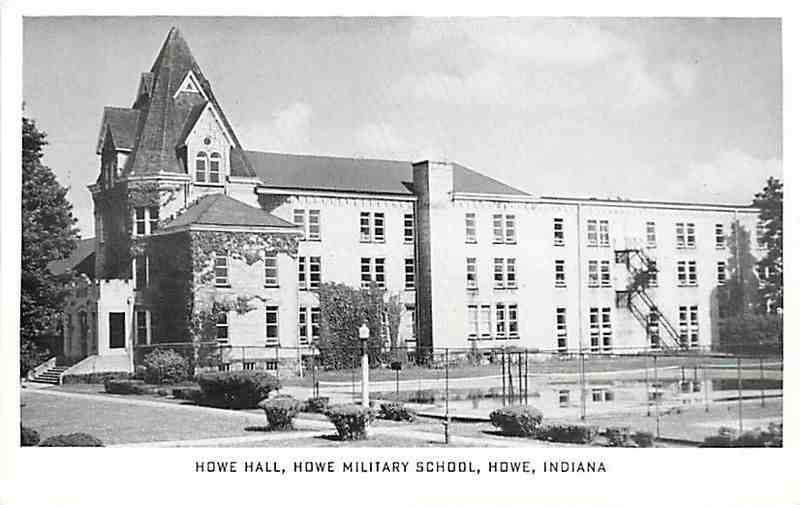 The famous postcard just before demolition in early 1960. There must have been many hundreds of these postcards printed. The similar Gray Hall card and this one are almost always for sale on E-Bay (r). You can tell both buildings are empty; there are no curtains or drapes in the windows. The tennis courts are in the foreground.