Exploring the history behind this iconic sacred building

The Chapel was built in four stages: First the tower and nave including the first part of the crypt chapel.

The marble altar was later moved to the Crypt addition under the Mothers’ Chapel.

Then, the Sanctuary and North Transept were added in 1909. 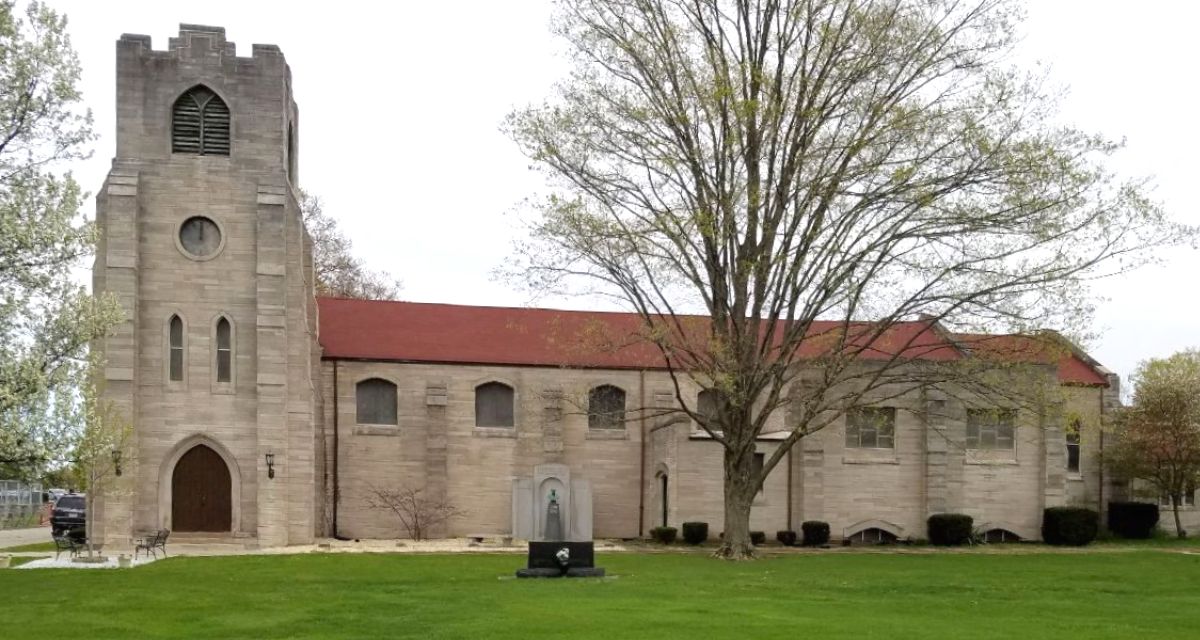 St. James Chapel showing all stages of construction including the 1955 Sacristy addition at the east end. 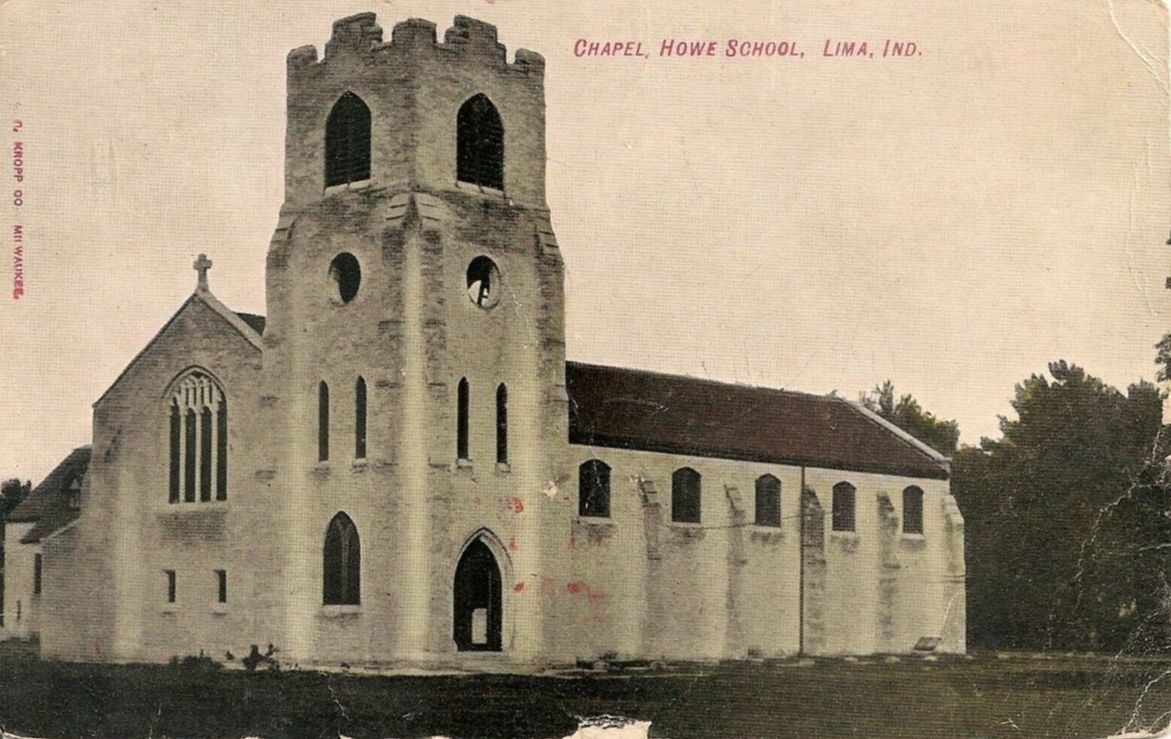 The earliest photo of St. James (1905) before the sanctuary was added and the clock was installed. 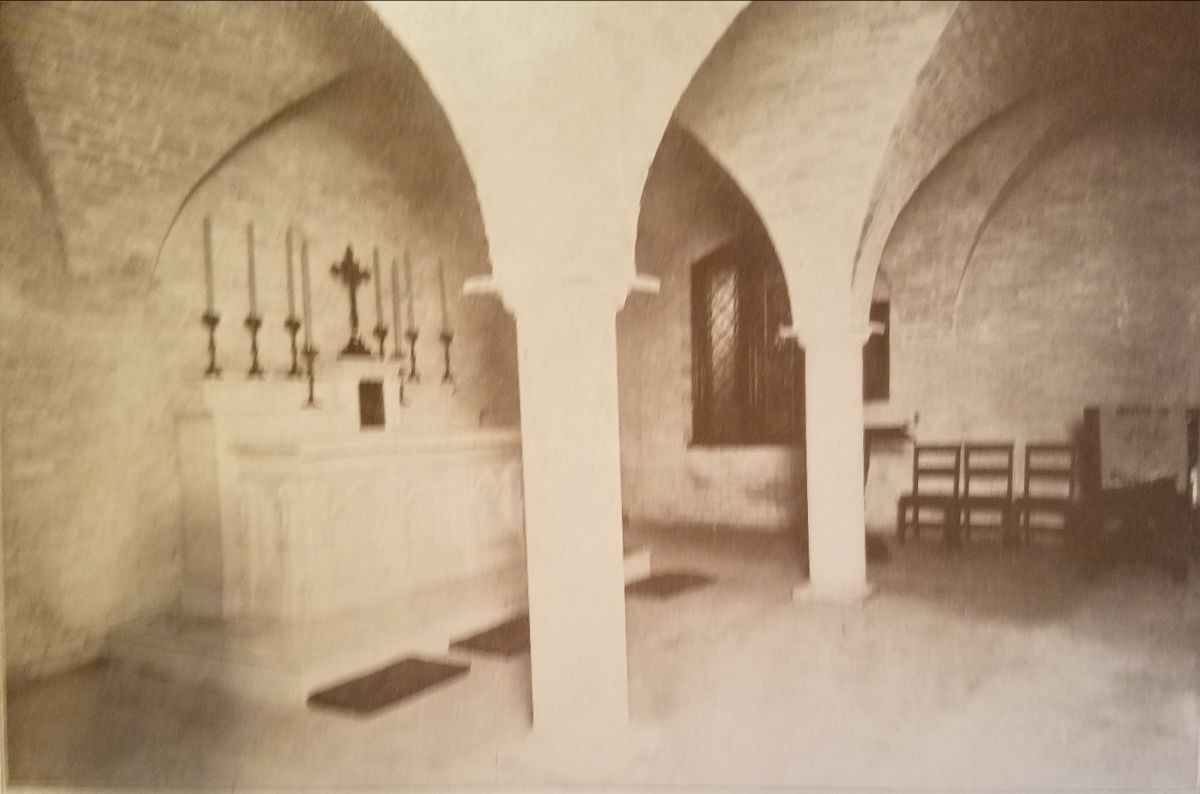 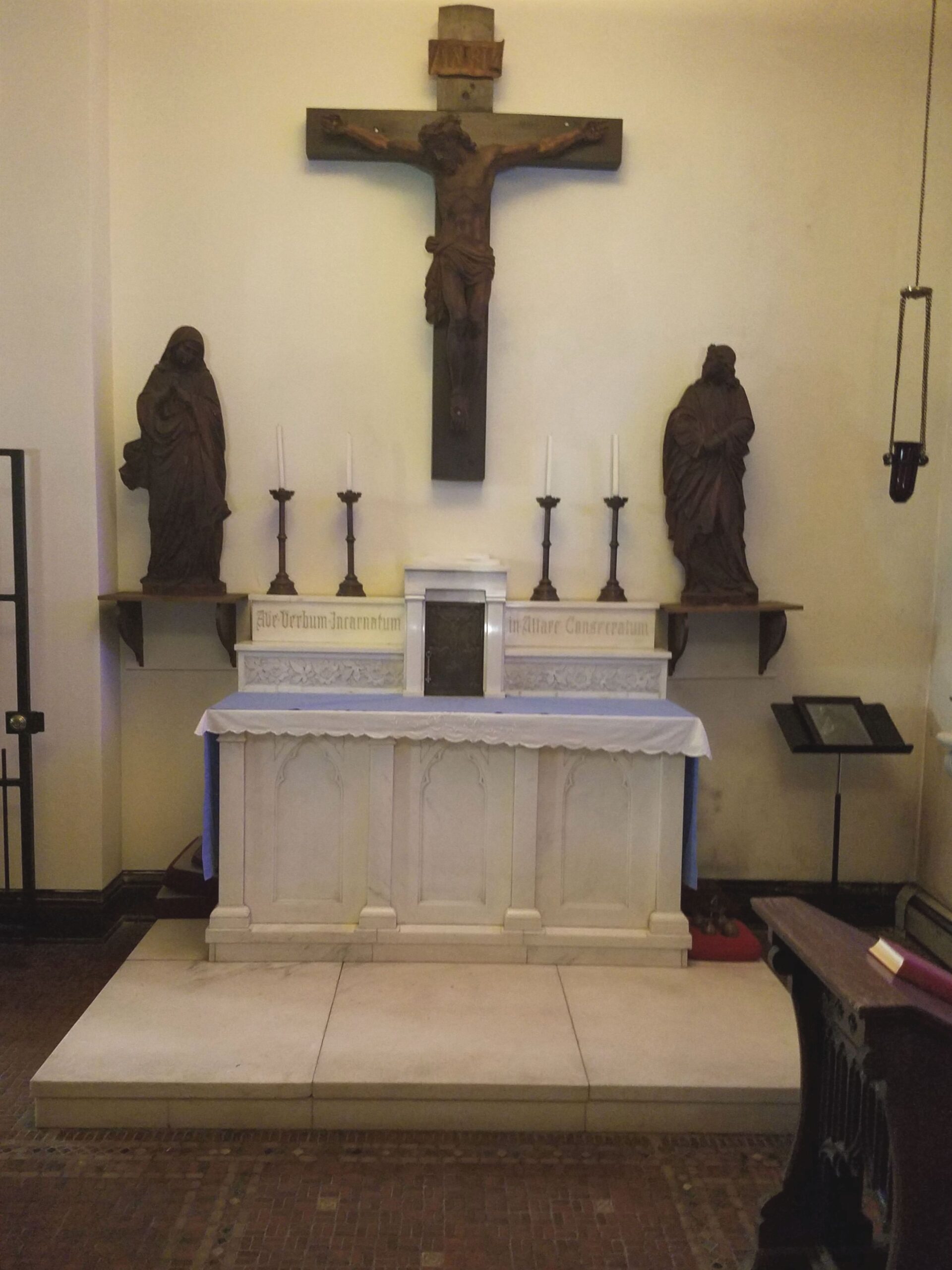 The Mothers’ Chapel marble altar in 2019.

The marble altar was later moved to the Crypt addition under the Mothers’ Chapel.

Then, the Sanctuary and North Transept were added in 1909. 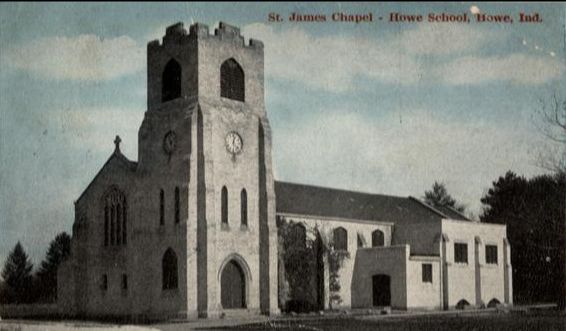 The Mothers’ Chapel when new as the south transept, circa 1914. 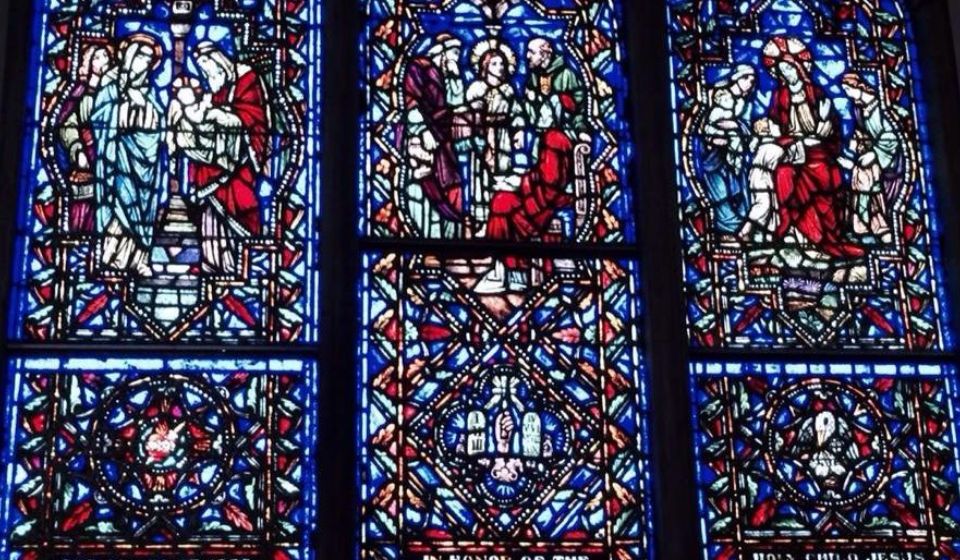 The stained glass windows found in The Mothers’ Chapel. 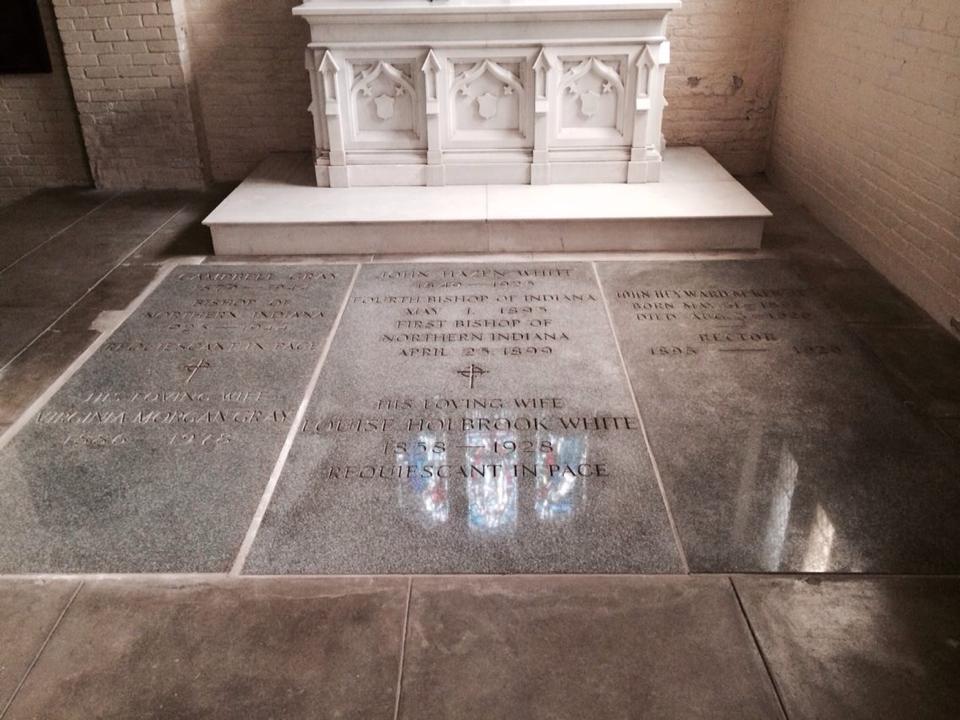 The crypt altar below the Mothers’ Chapel.

Finally, the Sacristy and Chaplain’s Office were added at the east end in 1955 and the whole building was covered then with limestone veneer, gifts of the Herrick family.

Many people have marveled through the years that such an exquisite building would have been built in a little hamlet in northern Indiana. It was an expression of the strong anglo-catholic devotion of three men, John Howe, his half-brother James, and Dr. John Heyward McKenzie, Episcopal priest, who became Rector of Howe School in 1895. Later, John Howe’s widow, Frances, also contributed greatly. These four people, John Howe Martin, adopted son of Mr. and Mrs. John Howe, four Bishops of Northern Indiana (and those bishops’ wives), Dr. Clarence Blake, Mrs. Blake, and her sister Miss Loy, are buried in the crypt beneath the chapel, as well as the Rev. Earl T. Jennings, Howe, 1912, long-time Principal of Howe’s Lower School.

James Howe gave $10,000 toward the construction of St. James Chapel; the cornerstone was laid in 1902. The original building ended at the first roofline break you can see in the south view photo above, which corresponds to the interior arch now seen between the choir and sanctuary that was originally a solid wall, with a dossal curtain behind the marble altar. You can also see the rood beam which extended across the full width of the nave and carried an oak cross. This cross was later placed in the west end of the Mothers’ Chapel with a carving of Christ crucified, which was brought back from Oberammergau by Dr. McKenzie in 1913; the Christ figure was carved by Anton Lang who played Jesus in the famed Passion Play of the time.

The rood beam was then sawed off, leaving just the hammer beams on each side, when the sanctuary was extended. There would have been dossal curtains in the liturgical colors for the church seasons of red, white, green, purple, rose and blue; the latter two only used on two and one day, respectively, in the church year.

Deacon George Douglass ’60 has observed that some of the bishops portrayed in the stained glass windows in the north side of the nave are pictured wearing non-liturgical (e.g. brown) copes, an unlikely behavior for an anglo-catholic.

In 1909, the north transept was built, containing the sacristy, Kimball organ, balcony seating, and a stairs down to the crypt. This area has incurred serious termite damage in recent years. There has also been detrimental damage to the Kimball pipe organ over the years from roof leaks. In 1914, the Mothers’ Chapel was built as the south transept, and the crypt was extended to the south under it.

This is the west end of St. James Chapel as built (pictured). The organ was “probably a Hinners” according to Dr. John Durgan ’63, who took organ lessons while he was a cadet on the Kimball organ which was installed to replace the Hinners when the north transept was built. Dr. Durgan stated the Kimball instrument was “badly out of tune and much of it didn’t work” the last time he played it.

Hinners organs were mass-produced in Pekin, Illinois in standard models, so were much less expensive than most other organs, which were mostly custom. Hinners was the first to mass-produce pipe organs.

After the Hinners organ was removed, St. Mark’s Parish began worshiping at St. James and donated the pews in the balcony. Kimball in Chicago was regarded as the leading organ builder at the time the Howe organ was installed, which is not a surprising choice considering Dr. McKenzie’s music degree.

The St. James organ is on the Organ Historical Society inventory. 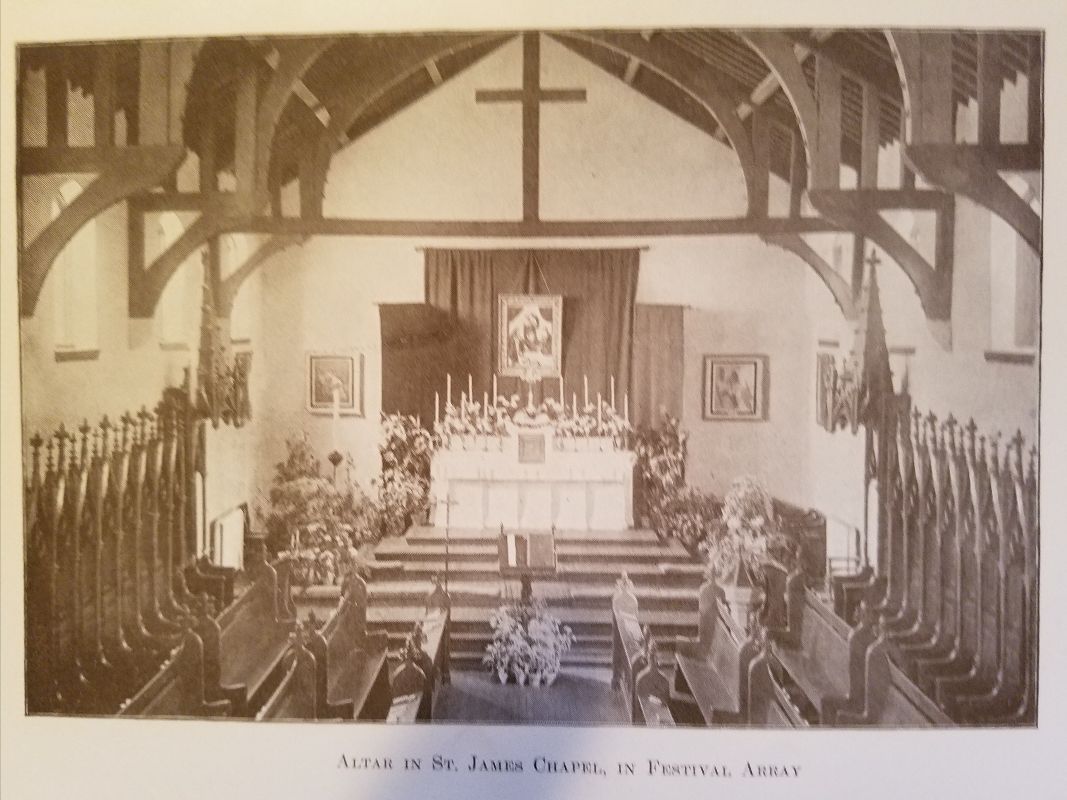 This is the original east end of St. James Chapel. The east wall in this 1905 picture is where the arch to the sanctuary is today. The north transept (organ and balcony) and Mothers’ Chapel had not been built yet. The choir and organ were in the balcony at the west end. 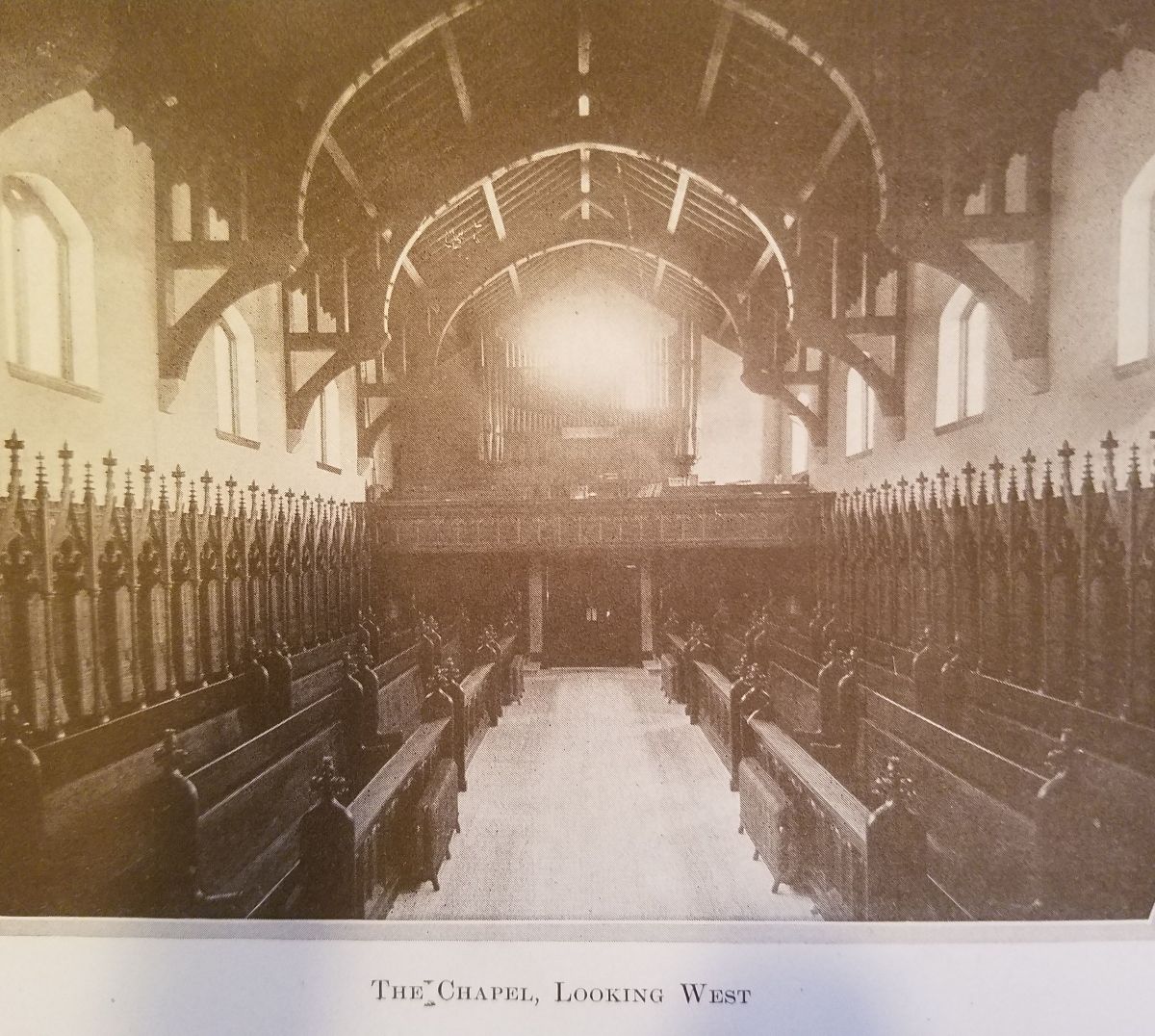 In 1934 Miss Grace Libey, long-time librarian of the School, wrote a 50-year history which was never published. It was a big scrapbook with clippings of pictures and typewritten text, hidden in the school vault for many years. Her listing of the gifts and memorials in St. James Chapel is the most complete I have seen, so I transcribed it here from my photocopy.

“The tile pavement of the Sanctuary and white marble altar steps are also in memory of Bp. White. The faience tile floor, the Agnus Dei, and medallions of the four evangelists, are given in memory of The Reverend Charles Nelson Spaulding, D.D. first Rector of Howe Grammar School, predecessor of Howe School. The choir tile floor and marble steps into the nave are a gift of James Howe Nichols, a nephew of Ms. Mary Nichols and her brother Charles S. Nichols; Charles was Treasurer of the Howe School Board of Trustees for twenty-five years.

“The large stained-glass window filling half of the nave west wall tells the story of the Epiphany, as the Maji present their gifts to the infant Savior. The window dedication is, “To the memory of Jessie Couthoui this window is given by her sister, Florence Couthoui. Trinity 1910.” The pews on the balcony at the west end of the nave are given by St. Mark’s Parish at the time they began worshiping in St. James (1909).

“The high altar is carved of Parian marble, quarried on the Greek island of Paros in the Aegean Sea. The same marble was used to carve the famous Venus De Milo and other classic Greek works. This marble is pure white and translucent. The altar appears to glow in late morning sunshine through the south windows, which windows are from the original St. Mark’s Church. The altar was given by Sister Mary. O.H.N. in memory of The Right Reverend John Hazen White, D.D.; he is buried in the crypt. Order of the Holy Names is a nuns’ order founded in Canada. The altar crosses, vases, candlesticks, Paschal candle stick, Requiem candlesticks, processional crosses, and torches are all memorials. Gold and silver chalices, a gold pyx, glass and silver cruets, ciboria, and lavabo bowls and a baptismal shell are all memorials presented by friends of the school. Among vestments of great beauty and value are several Eucharistic sets of cloth-of-gold, a white set with many jewels, and several other sets. Embroidered linens and lace superfrontals for the three marble altars, and other linens are gifts to the chapel. The credence table of hardwood was hand-carved; given to the chapel by Mrs. R. B. Julian, a long-time patron of the school.

“The white marble altar in the Mothers’ Chapel was given by the children of Bishop White in memory of their mother. Their gift included dossal curtains for every season of the church year. The two triple-stained-glass windows in the Mothers’ Chapel were given by the classes of 1929 and 1930, the former portraying scenes from the life of the Blessed Mother and the latter telling the childhood of Our Lord and his love for children. Originally there was a rood beam across the interior of the main chapel which had a cross on it. The beam was sawed off, leaving hammer beams like the rest of the roof structure. The cross was hung in the west end of the Mothers’ Chapel with the figure of Christ which had been carved by Anton Lang, who played Christ in the famous Passion Play. The figure had been brought from Europe by Dr. McKenzie.” 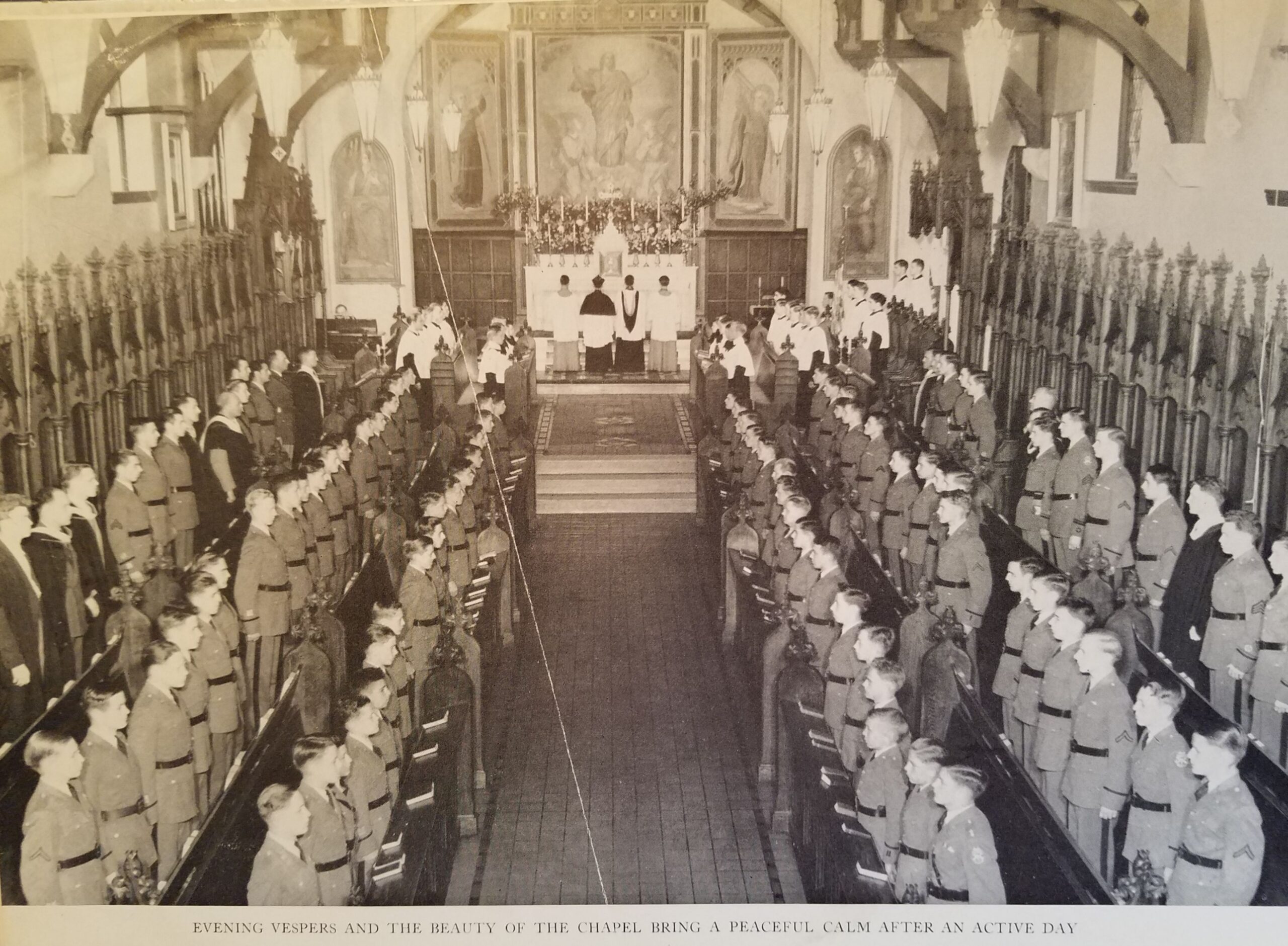 Cadets attend chapel in St. James circa 1950.
Caption below photo reads: “Evening vespers and the beauty of the chapel bring a peaceful calm after an active day.” 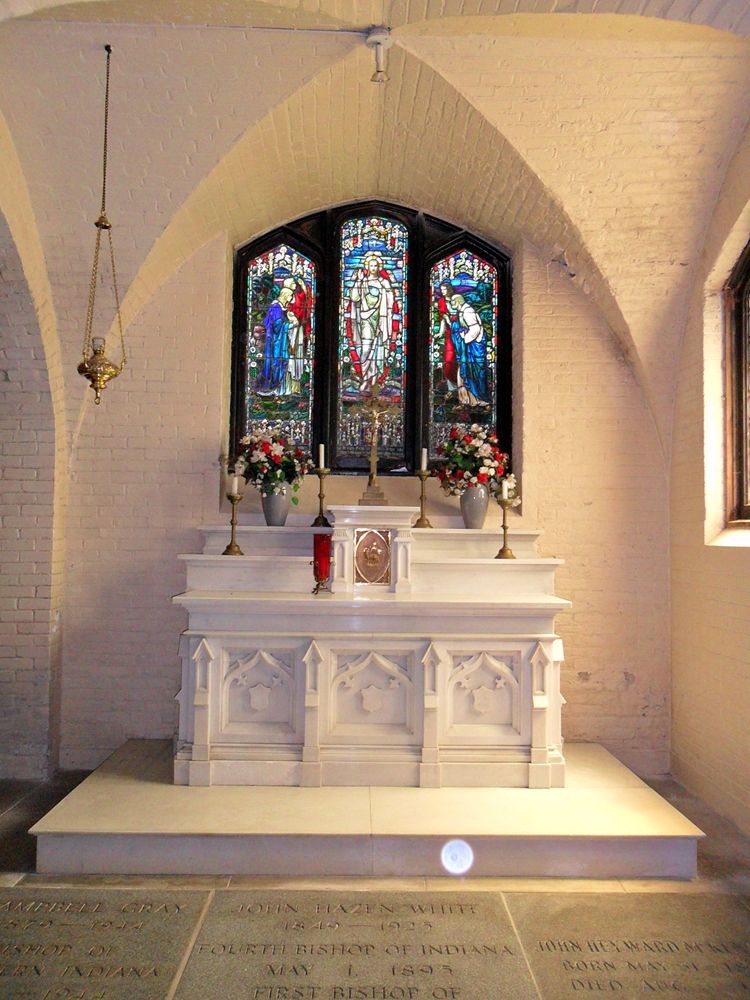 The crypt altar and window below the Mothers’ Chapel.

The brass cross on the Crypt altar was given by Mrs. John B. Howe and Mr. James B. Howe to St. Mark’s Church in memory of The Right Reverend Cruikshank Talbot, D.D., first missionary bishop of Indiana. The marble altar was given by Mr. F. J. Lautz of Montreal, in memory of The Right Reverend David Buell Knickerbacker, D. D., Third Bishop of Indiana and a founder of Howe School. The stained glass window above this altar is a gift of the McKenzie brothers, The Reverend John Heyward, Robert Fenton, and Harry, in memory of their father, mother, and sister.

In 1955, the entire outer walls were veneered with ashlar-cut Indiana limestone to harmonize with the then-new buildings donated by the Herrick family. An addition was built onto the east end of the sanctuary then to house the sacristy and chaplain’s office. 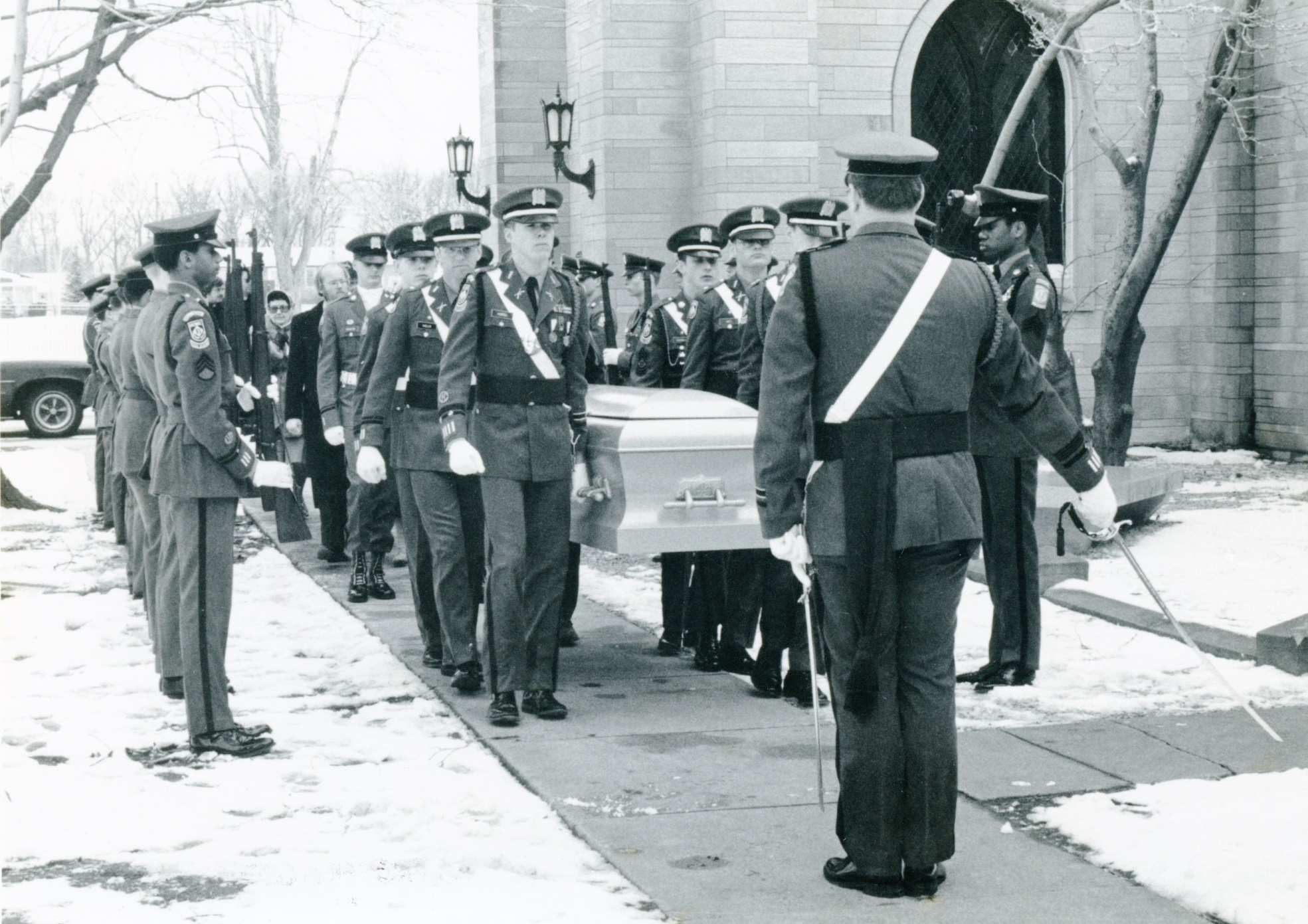 Cadet pallbearers carry the casket of Bishop Walter Conrad Klein into the Crypt for burial.

“The closest pallbearer in photo is Mike Harris ’80. I’m to his left with face partially obscured as the other front pallbearer.  We practiced the day before using an empty casket which was very light. We had great difficulty holding the real casket one-handed with white gloves. Mike and I were in front because we were tall and could keep the casket level going down the stairs to the crypt.  We had to pass Mike’s corner around a pillar in the crypt. Another cadet temporarily took that corner. I think that was Jim Kasinecz.” 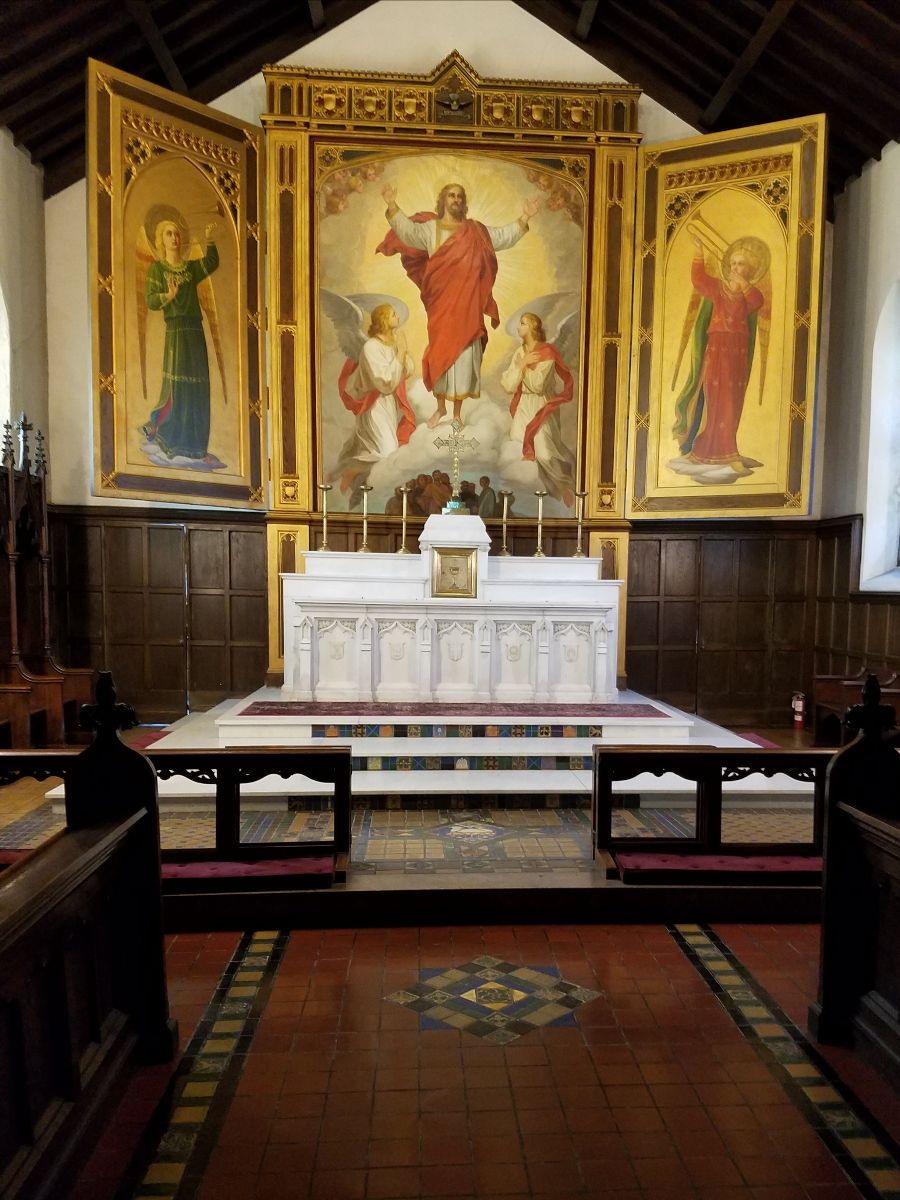 Interior of St. James showing high altar and Sig. Ducci’s copy of Hoffman’s “The Ascension” which was painted on the campus, probably in the bell tower due to its size. This copy has much more red in it than the original.

On Alumni Weekend 2022 the shutters (“wings”) of the magnificent triptych altarpiece were partially closed. When the Episcopal liturgical tradition was observed in St. James, the shutters were only closed during Lent. According to Fr. Philip Morgan, the shutters cannot be completely closed without temporarily lifting the brass altar cross off the tabernacle, as you can see in this picture. 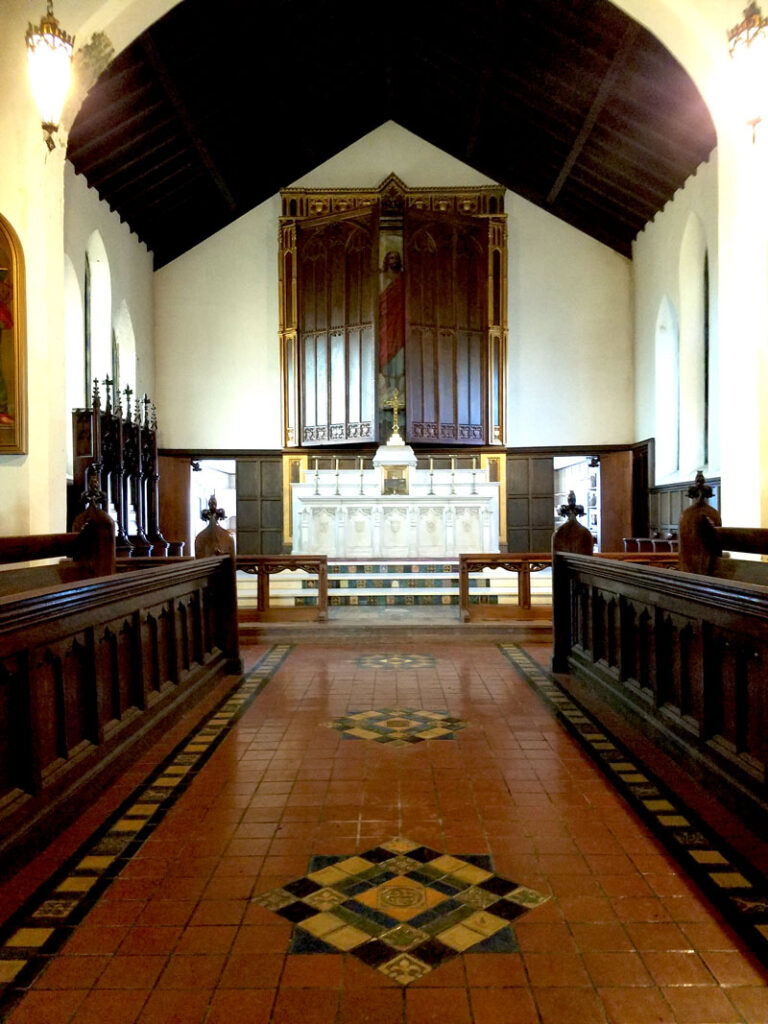 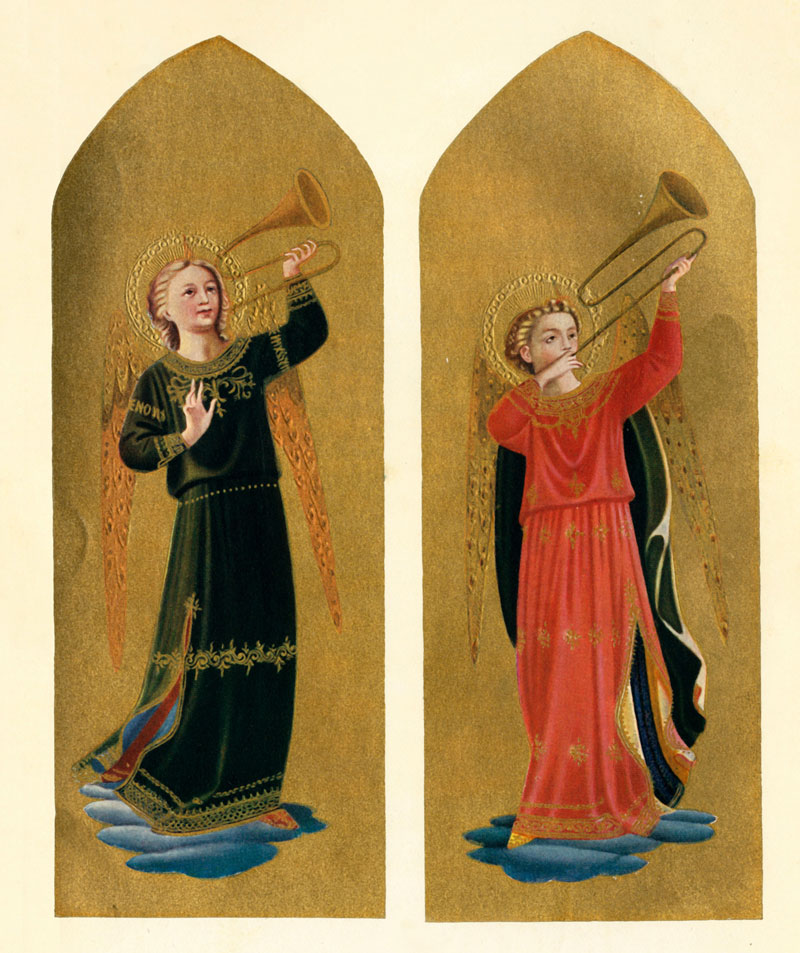 The paintings copied by Sig. Ducci on the front of the shutters (“wings”) of the triptych have been described in the past by the School as “Fra Angelico’s Angels”. Fra Angelico actually painted many dozens of angels. The two Sig. Ducci copied are ‘Two Angels with Trumpets’, 15th century, (c1909).

Italian Early Renaissance painter Fra Angelico (born Guido di Pietro, c1395-1455) was a Dominican friar (his name means ‘Angelic friar’), and worked in Florence and in Rome. From Fra Angelico – Masterpieces in Colour, by S. L. Bensusan. [T. C. & E. C. Jack, Frederick A. Stokes Co., London & New York, c1909]. Sig. Ducci’s copies reversed the red angel so that trumpet is pointing toward the center panel of the triptych, which is Ducci’s copy of “The Ascension” by Johann Michael Ferdinand Heinrich Hoffmann (1824-1911) a German painter of the late 19th to early 20th century. Hoffmann is best known for his many paintings depicting the life of Jesus Christ. His 1890 painting “Christ in Gesthemane” was done while he was grieving over the death of his mother; it is said to be the most copied painting ever. Fra Angelico painted many angels; his paintings were known for their very natural faces and fine detail. “Two Angels With Trumpets” photo from Alamy, used with permission. These paintings were popular in 1909 when Dr. McKenzie was adding the Sanctuary onto St. James Chapel. The Oxford Movement church decor preferred Christ Triumphant (Ascension) over crucifixes.