The best account of the munificent, epochal generosity of the Herrick family to Howe Military School that I have found, appears in the excellent 50th Anniversary Memory Book of the Class of 1958. Thanks to Roger Thomas ’58 and Richard Cordes ’58 for permission to share part of it with you here.

Our Times: The Howe Renaissance

Two things happened at Howe during the Class of 1958’s experience. The first was COL Bouton’s 1955 decision to integrate the school. Brown v. Topeka had been decided just months before he made his proposal to the Board of Trustees. [He actually proposed this to the Alumni Association meeting in June 1953, so it wasn’t a sudden decision. – Editor] Five African American students were authorized as a test group, and the first enrolled in 1960. The school became co-educational in the 1970s.

The second [happening] began with a fire in the academic building in May, 1946. The decision was made to replace the building rather than refurbish it. When MAJ Frank Little listened to the cost as presented to the Board of Trustees, his only response was to stand at the window and shake his head incredulously.

Some of the Class of ‘58 were in the formation when the Memorial Academic Building was dedicated in October 1950. The original academic building had been built in 1909, [by Dr. McKenzie as a gift to the School] and most of the other buildings were in similar [worn] condition. C Company cadets lived upstairs in Howe Hall above B Company. C Company cadets could bounce on the floor and touch the ceiling, much to the dismay of the B cadets below who were trying to clean their rooms. The faculty was housed in another wing, and the gym and canteen were in the basement. Into this scene walked Ray Wesley Herrick, a man of little formal education who had invented compressors for refrigerators. His son, Kenneth, had graduated from Howe in 1940.

Ray was interested in “doing something for the school.” In 1953, he built the swimming pool. In 1954, he built three new Upper School barracks. B Company was not finished in September, so we had to move into the old A Company barracks [Gray Hall] while the new dorm was finished. In November, all the B Company cadets had to move everything to the new barracks without the help of any vehicles. In 1955, Herrick resurfaced [the exterior of] St. James Chapel. The infirmary, mess hall, and Lower School dormitory were completed in 1957. An annex was added to the academic building in 1958, together with a recreation center and the superintendent‘s residence. In 1960, he built an additional barracks for a new D Company, and then built an auditorium. In 1961, the library and a smaller chapel were completed. He then bequeathed a huge chunk of stock in his Tecumseh Products Company, which sustained the school through the dark days of the late 1970s. COL Bouton referred to all this as the “Second Founding.” 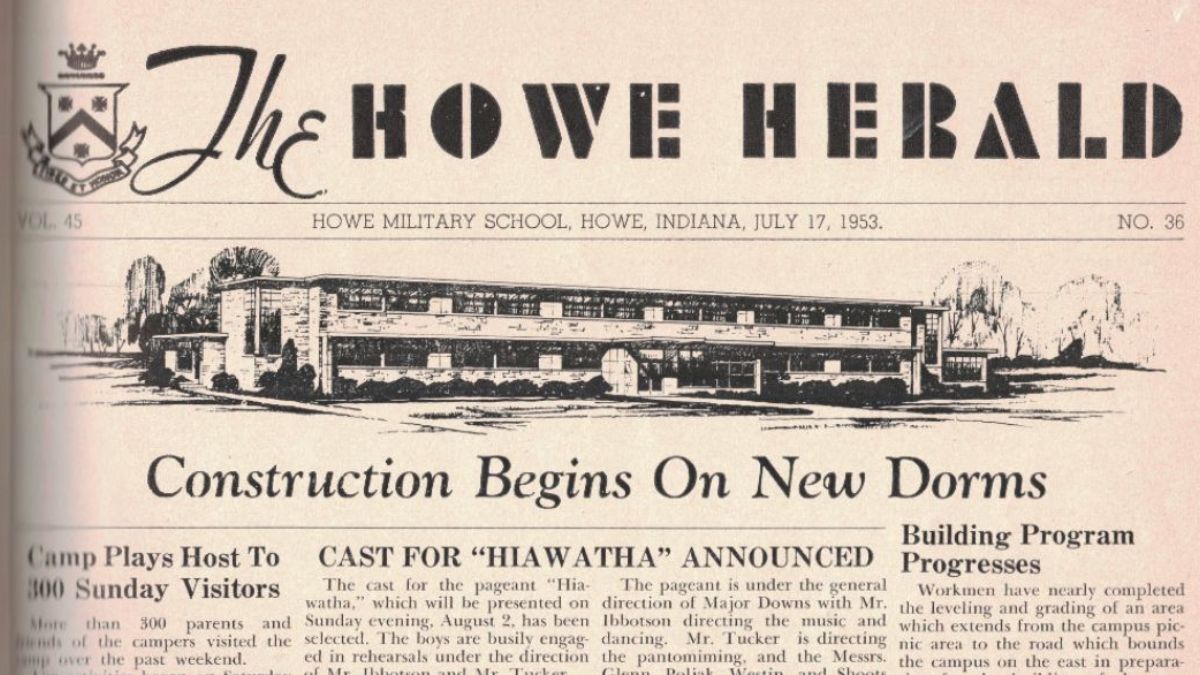 The first Herrick family donation made public was $10,000 for the study hall in the Academic Building. Then the December 24, 1952 issue of the Howe Herald announced $175,000 for the new swimming pool and an $800,000 construction program for new barracks for each of the then-three Upper School companies. Ground was broken in March, 1953 for the new pool and at commencement for the new barracks. By July, construction was underway.

Our Times: A New Era Begins

The [WW II] veterans had accomplished their mission, during the Eisenhower years, while the Class of ’58 was in school. After winning the war, they had won the peace in both Japan and Western Europe. They really had built the largest middle class in the history of the world. Still, there was a dichotomy in the society the veterans had built. By the time the Class of ’58 graduated, Joe McCarthy was already dead. Television was being seen. Bill Haley and Elvis Presley were being heard. So were Rosa Parks and Betty Freidan. The sense of adventure, which would characterize the New Frontier, was waiting in the young minds of the Howdy Doody generation when they arrived in college.

The Class of ’58 had to choose between their parents’ conservative business sense and the spirit of the new era. Martin Luther King‘s career occurred in the midst of the white flight to the suburbs. Gloria Steinem was originally a Playboy Bunny. Rachel Carlson asked questions that had been dormant for years. The Warren Court’s “rights revolution,” based on judgments about constitutional values of autonomy, integrity, and respect for the individual, permeated every aspect of American life. A similar thing was happening in world affairs. The last of Stalin’s pallbearers had passed from power in the Soviet Union between 1953 and 1960. Presidents Khrushchev and Eisenhower agreed on the foolishness of the Cold War. Disarmament was already being discussed in Geneva. A Big Four Conference was scheduled in Paris for May 14, 1960. Every idea in what would become known as glasnost and perestroika were in the agenda. Then, on May 1, 1960 the Soviets shot down a U2 spy plane and captured its pilot, Gary Francis Powers. The Paris [“Peace”] Conference collapsed. So much ventured, so little gained. A year later, President Khrushchev met with the young, new President Kennedy and concluded that this was someone he could push around. The second phase of the Cold War began, and the course of foreign relations was set for twenty years. The Class of 1958 saw the Space Race, Vietnam, Cuba, the Peace Corps, and Chinese ascendancy.

The Class of 1958 and the Howe School Mission

The question was: Did Howe meet its mission with the Class of 1958?

Had it taken worthy boys who could appreciate its ideals of Christian manliness, and provided them with the development of Christian character? Twenty-five years later, interviews were conducted with 45 of the remaining 51 classmates. The results of these interviews argue that this class was extraordinary, even a great class, as John Pagin later said. In every category assessed, members of this class out-performed national norms by wide margins, except in the second marriage category. Forty-eight of them went directly into college. Jim Joseph and Bill Paul went into the military. Forty-four earned their college degrees. That‘s 86% college graduates compared to the 21.5% national average. Nineteen of them did military service. That‘s 42% compared to the national average of 13.5% Twelve were officers.

Roger Thomas also became a Freedom Rider in Mound Bayou, Mississippi. John Bromley became a Peace Corps volunteer in Ecuador. Dr. Steve Barnett became a Public Health Service Officer in the National Academy of Sciences, Alexandria, VA. Six of them had been married more than once. That‘s 13% compared to the national average of 50%. Seventy-six percent of them are either self-employed or employers. The national average is 9%.

Their attitude toward Howe is reflected in that 76% have contributed financially to the school, rather than the national average of 46% for private schools and colleges. Sixty-three percent attended the 25th reunion in 1983. It appears that 68% of the survivors attended the 50th reunion in 2008. 83% have sustained some kind of contact with the school, usually in stopping by, but often through correspondence.

Ron Beeson, Chuck Stutenroth, and Ty Place even enrolled their sons. There are other measures, like religious and charitable work, to show whether Howe did its job. How many of the classmates remained in contact with each other? The fact remains that the Class of ‘58 had its dreams, and the school helped them achieve those. As in so many things, John Pagin was correct when he said, “The Class of ’58 was great!”