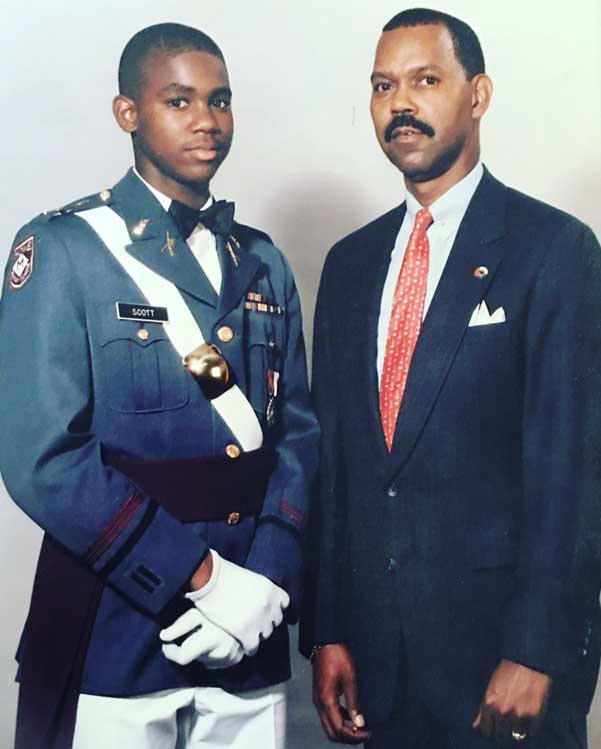 (Photo of Gee and his father at Howe Military Academy.)

This was written by Gee Scott ’94, who is an air personality on KIRO Radio, Seattle. Thanks, Gee, for your kind permission to share this with our Association.

One night during my 7th grade year, a few of us were sitting around discussing how happy we were, or weren’t. We were complaining about not having free time and not being able to do what other kids outside of a military school got to do. So we decided that we were going to run away and show everyone we meant business. But first, we were headed to McDonald’s in Sturgis, Michigan. So off we went. I believe it was about five or six of us — I can’t really remember. But I do remember that we were walking along the main road that headed out of town.

About 20 minutes into the trip, a minivan pulled over in front of us. It’s Major Shelton — oh boy, trouble. He was our tactical officer (the adult that’s in charge of our barracks). He says, “OK guys, just get in the van.”

That’s exactly what we did: We got in the van.

As we were riding back to campus, all I could think of was how I was likely about to get kicked out of school; how my parents were going to be so mad at me. All Major Shelton said on the ride back was that he wanted us to head directly to his office as soon as we got back.

We got out of the mini-van, and went right to his office. He came in and lit up a cigarette. I was ready for him to start yelling at us.

Instead, the first thing he says, “I want to understand how you feel and what made you do this.” That question led to about three to four hours of talking, crying, and letting out everything that was going on inside of our young minds.

When it was done, he told us that he loved us. He said that he believed one day, later in life, when times got hard, that we would remember this moment and know that things will be okay.

This is an excerpt from Gee’s article titled, “My School, Howe Military Academy, Is Being Shut Down,” which he wrote for KIRO Radio in March 2019. Read the full story for more great Howe memories and photos.