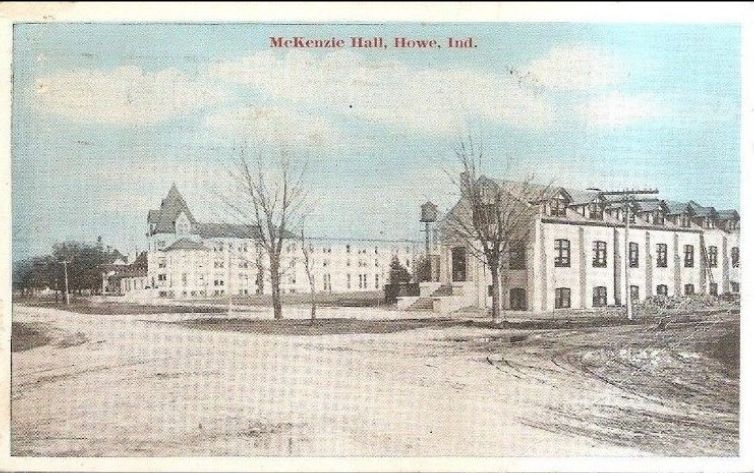 For many decades, Howe Military School catalogs called it the Refectory, “young gentlemen dining together.” Cadets always called it the “Mess Hall.” The student dining accommodations from 1884 to 1895 are largely unknown. With the arrival of Dr. McKenzie in 1895, the enrollment went from dozens to over a hundred, so better facilities were needed. This picture shows the major 1895 expansion, which is east of the second McKenzie Hall which was built in 1911. The buildings in the distance form the “quadrangle” which will be detailed in another article. The quadrangle is comprised of Howe Hall in the foreground, and the original St. Mark’s Church building moved to fill the space between Howe Hall and Knickerbacker Hall. The south end of the east leg of this complex was “Blake Hall” donated by Dr. Clarence Blake. It was the original “Refectory,” later converted to the school auditorium after the first McKenzie Hall was built. Note that the streets aren’t paved yet. Strange as it seems, this is one of the very few photos showing the north side of the former St. Mark’s Church in any detail.

The next picture from about 1910 shows the first actual “Dining Hall,” McKenzie Hall, which was built in 1903 between St. James Chapel and what was known then as “Senior House” or the Upper School. The 1903 date comes from the 1928 catalog. Later Senior House was re-named Gray Hall in honor of the first Bishop Gray, who is buried in the crypt below St. James Chapel. His grandson also became a Bishop of Northern Indiana, he’s retired in Virginia at this writing. This version of McKenzie Hall was donated by Mrs. Howe and Dr. Blake in honor of Dr. McKenzie. 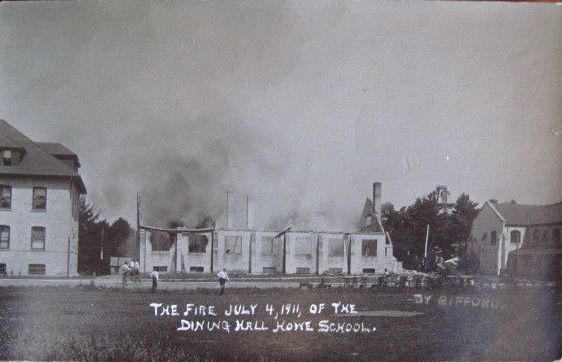 Fires were the bane of military schools in the early 20th century. Many schools did not financially survive their first big fire. Howe had two major fires in its history, the first one was on July 4,1911, when the first McKenzie Hall burned almost entirely, just the brick walls standing. Early 20th Century Howe catalogs touted the night watchman patrols and turning the electricity off at 10 p.m., with frequent fire drills, all to assure parents about their cadet’s safety. The second major fire was the Old Academic Building, which burned in 1946. Notice in the picture above (which is not in Ray Kelly’s history book titled “Here’s Howe”) that many of the chairs have been saved. 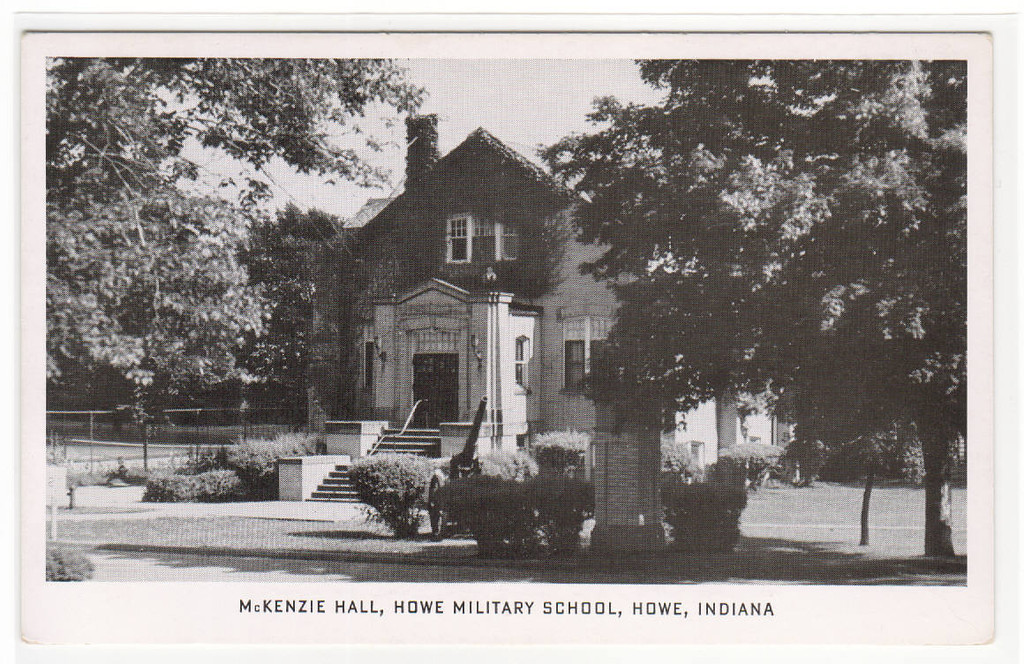 The second version of McKenzie Hall was built as far away from the rest of the campus as possible at that time, presumably in the interest of fire safety. It appears to follow the same floor plan as the original., kitchen in the basement, dining on the main floor, and infirmary upstairs. This picture shows the original vestibule on the north end of the building. The beautiful bronze porch lights adorned the porches of several campus buildings, Howe Hall, Gray Hall, and McKenzie Hall. I wonder what happened to them.

The beautiful oak “refectory tables” from this building remained in use in the later Major Merritt Dining Hall until the School closed in 2019. The diagonal sidewalk across the southeast corner of the Parade Field was to enable marching formations of cadets from “A” Company (Gray Hall) and “L” Company (White Hall) to march into McKenzie Hall clear of “B” and “C” Companies, (Howe Hall); “B” and “C” having formed up on the sidewalk along the south side of Union Street. The Battalion Staff formed up in front of these steps; the order of march into the mess hall was staff, A. B, C, and L.