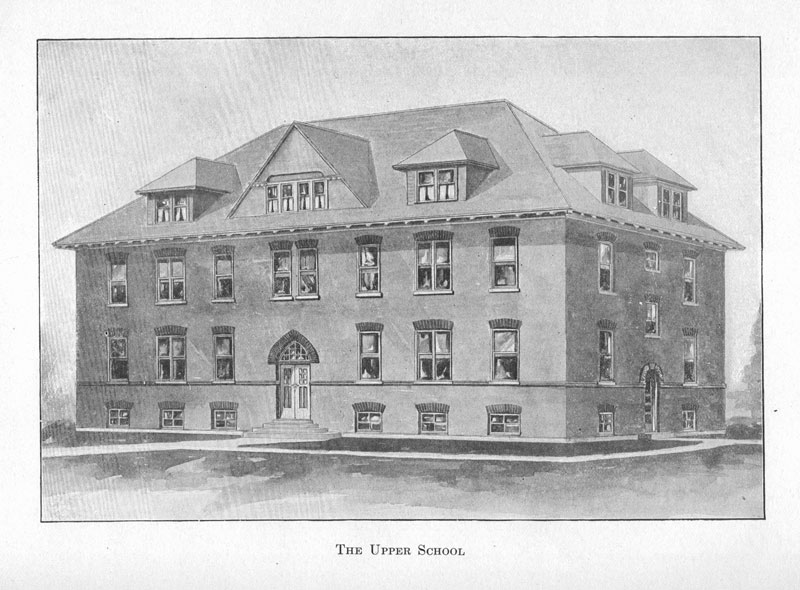 The architect’s drawing of Gray Hall, built in 1907 at a cost of $10,000 as a memorial to John B.Howe. Originally named the Upper School, sometimes called Senior House, and renamed Gray Hall in the mid 1920s,in honor of The Rt. Rev. Francis Campbell Gray, who was consecrated Bishop of Northern Indiana in 1925. 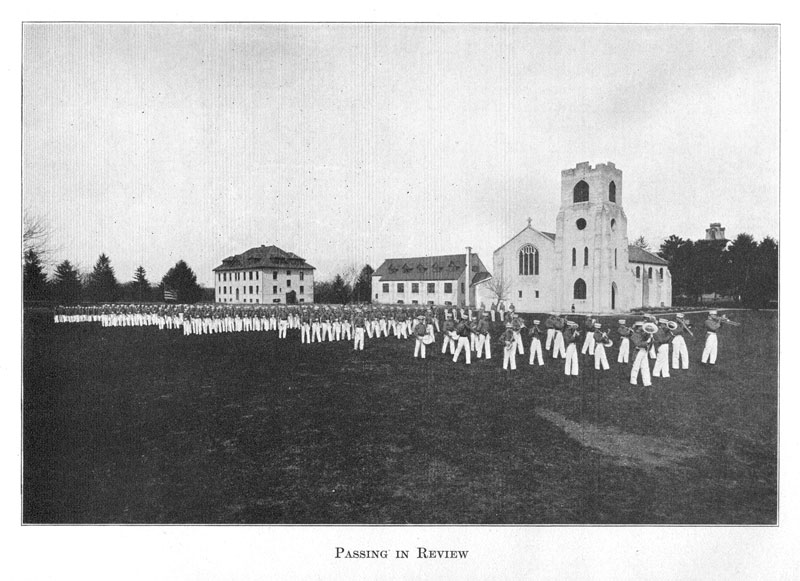 A 1908 picture of Gray Hall before its first front porch was built.  St. James Chapel has no clock in its tower, no Mothers’ Chapel, and no sanctuary.  The building in the middle is the first McKenzie Hall, (mess hall) built in 1903 and destroyed by fire in 1911. 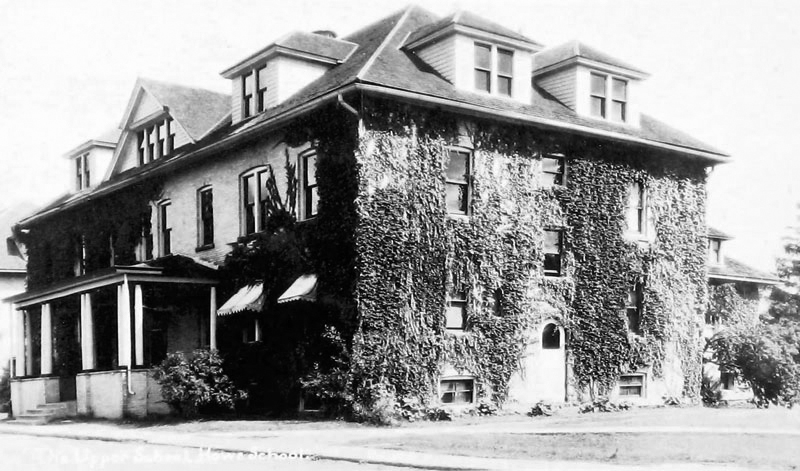 In this view we see the first porch and a view of “The Flats” which is original to the building but extended it to the east for more rooms.There were masters apartments in this building. Later one of apartments, the southwest rooms on the main floor, was occupied by the “A” Company Tactical Officer (adult School staff member).  Many of the rooms were originally en suite with one room as a study and the other room as a bedroom.  By the 1950s the doors between the en suite rooms had been nailed shut with quarter-round moldings. At that time the building housed over 40 cadets.  The two upper floors were cadet rooms, as well as four rooms on the main floor of The Flats and two rooms on the second floor of The Flats.  Those two rooms were the best in the School with ample floor space and dormer windows in three walls.  The main floor had rooms along the west side and in the east-side corners, with a big Common Room in the middle, where “A” Company formed up in cold weather.  The west side room north of the vestibule was the campus barber shop.  In the basement was a large center room dominated in the 1950s by a pool table and a large worktable fitted as a rifle-cleaning rack.  Under The Flats was a lounge at the east end of the basement that brought Howe its first television when WKZO-TV went on the air in Kalamazoo.  Along the west half of the basement from the north were the latrine, showers, washroom, “butt” room (for cadet smokers with a “butt permit”) and  janitor’s supply room.  The luggage room was across to the east from the janitor’s room.  The School insisted that all luggage and civvies be locked up.  With no civvies and the very small weekly cash allowance, the School doubted a runaway could get very far.

The Common Room, in the center of the main floor, was equipped as a living room in its early days. Later it was where “A” Company formed.  To give perspective, the large ceiling beam extending north from the east side of the fireplace chimney supported the east exterior wall of the main building.  Above the ceiling from this beam to the east wall of the Common Room was a flat roof between the east wall of the main building and the west wall of The Flats.  The stairs goes to the two rooms in The Flats; the landing is under the middle dormer on the east side of The Flats.  At the 2100 daily Tattoo formation, the cadet First Sergeant would stand on the ingle seat next to the fireplace and read off the daily assessment of demerits.  If you received demerits, you were said to have “gotten soaked.” 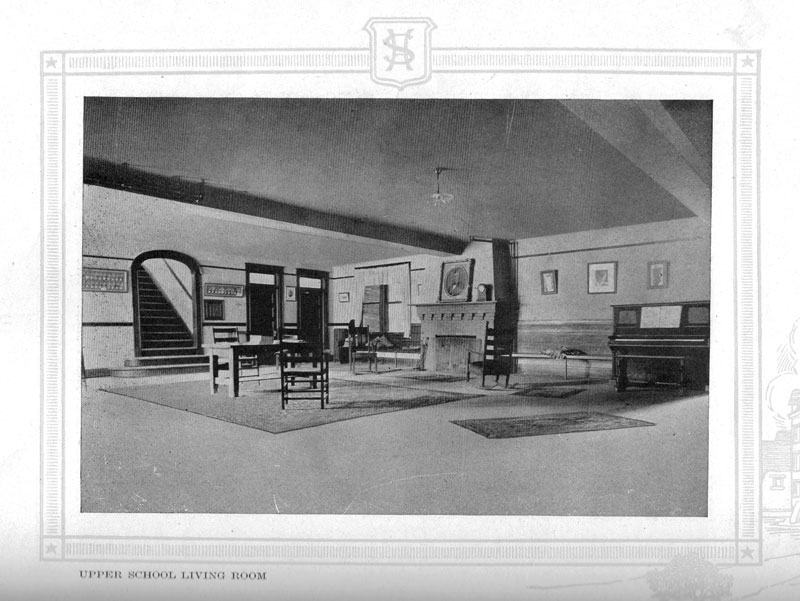 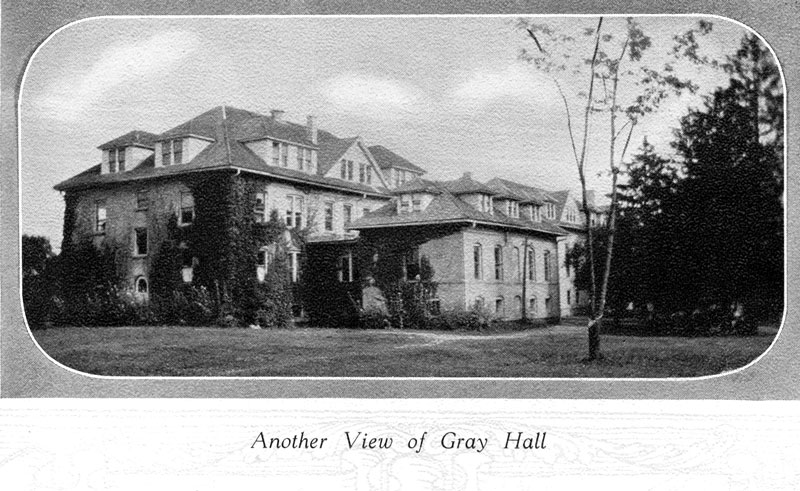 The Flats from the southeast with a good view of the east side of Gray Hall.  There are just three dormers on the east side of The Flats; part of the old Academic Building is at the right edge of this picture. 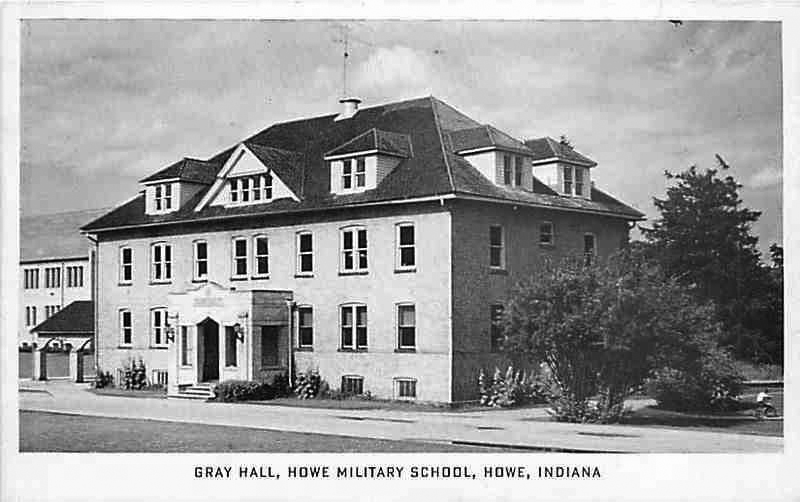 This picture was taken not long before Gray Hall’s demolition in 1960.  The building is empty: no curtains in the windows.  After 50 years’ service as a barracks location, Gray Hall’s site became the front lawn of the Major Merritt Dining Hall.   The spirits of generations of “A” Company cadets still march out onto Alumni Drive.where the former front steps were.   I’m one of them, proud to have been a member of Howe’s Long Gray Line.  “B” Company lived here for part of the year that their new barracks were being completed; “A” company had already moved to the new “A” barracks.