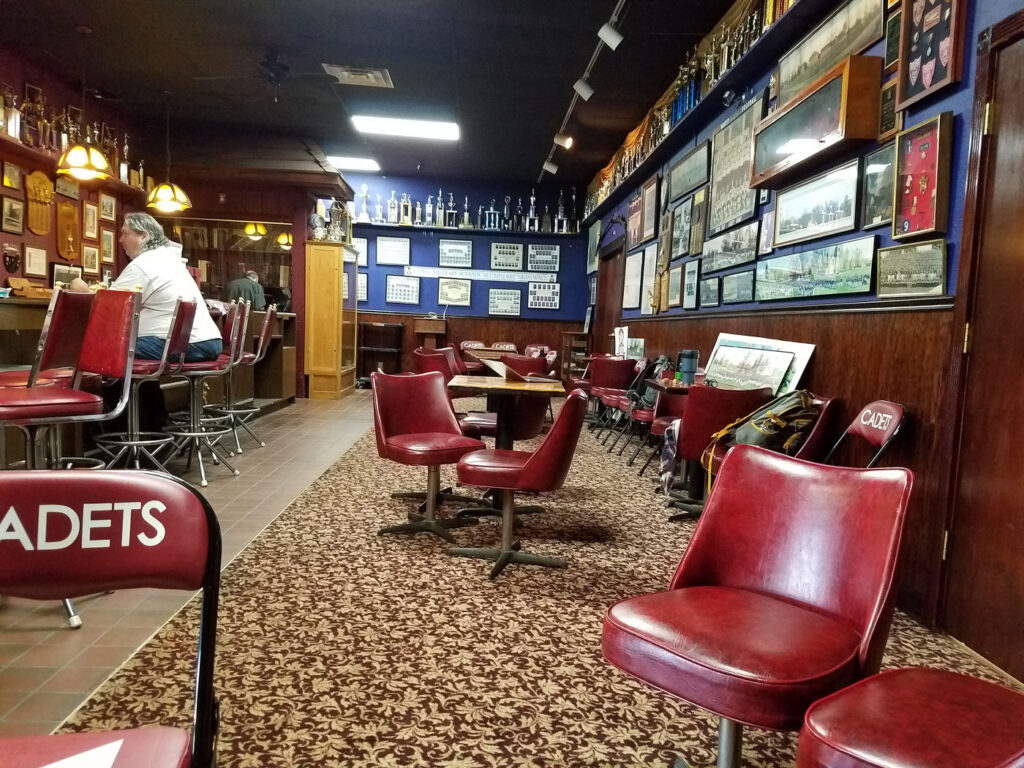 135 Years’ History in the Alumni Club
Class Pictures of the Honor Classes on the far wall.

The beautiful fall weather in Sturgis over Alumni Weekend enhanced the camaraderie of renewing old friendships and exchanging stories about life at Dear Old Howe. None of those stories can be verified after all these years, but…. the best one I heard all weekend was this: first, remember that Howe Military means just that; everyone has a weapon. Most cadets have a rifle, while senior non-coms and officers have swords or sabres, respectively. The story described alleged local teen hot-rodders screeching around the School driveways. The second day this occurred, the story goes, barracks windows opened and many rifles were pointed at the trespassers. Not knowing that the rifles had no firing pins, the trespassers left in a hurry and didn’t return, according to the story. Chortle.

Registration began Friday at the Alumni Club, 1505 East Chicago Road, Sturgis. Many had already registered online on the Association website. About 1700 a group journeyed to the former campus for a tour of St. James Chapel and group photo. Great Commission University Board Chair Pastor Nicolas Haman graciously opened the Chapel for our visit. The Rev. Philip Morgan, former Chaplain of Howe, led us in the School Prayer. Chaplain Morgan very generously brought a large box of memorabilia from his tenure at Howe which he donated to the Association. After our Chapel visit this group photo was taken: 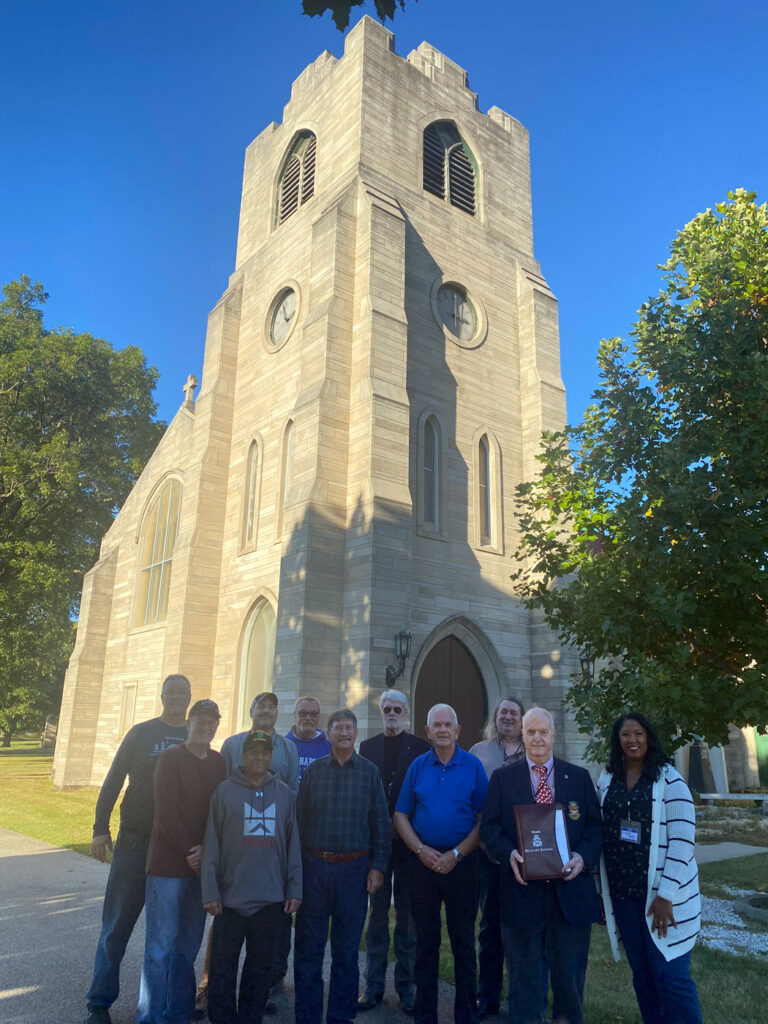 A pizza supper and libations were savored at the Alumni Club while Howe memories were shared, along with catching up on everyone’s life since Howe.

Saturday dawned sunny and crisp, too. The Annual Meeting began at 1300 hours. The financial report showed a balance on hand of: $27,688.38. The Board meeting immediately following was attended by:

The following Alumnae/i will serve as Directors on the Board:

The following slate of officers for the 2022-2023 term were elected by unanimous voice vote of the Directors, a quorum of at least five Directors having been achieved, and held at the Alumni Club, 1505 E. Chicago Road, Sturgis Michigan 49091.

The Annual Banquet was held in the Garden Room of the Alumni Club. The Honor Classes were recognized. Here are the members of the 50th Anniversary Class of 1972: 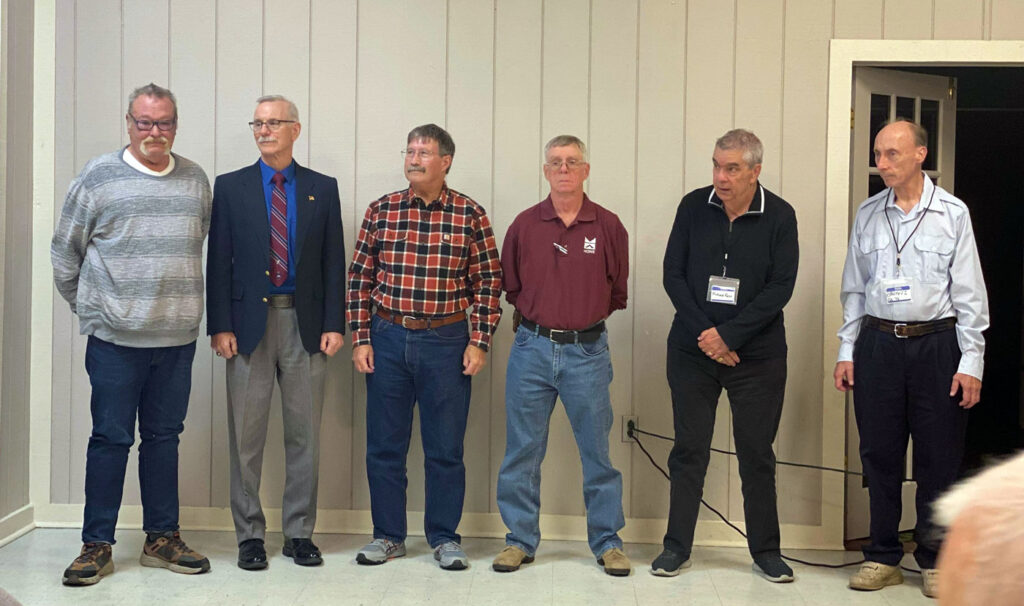 Here are the awards with plaques and citations voted by the Alumni Board and presented at the dinner. Dave Houser ’63 and COL Tate accepted their awards via Zoom.

Alumnus of the Year: H. David Houser ’63, retired bank president and bank board chair; served as School Treasurer for many years. Facilitated communications between the HMSAA Board and School Board, to re-establish a positive working relationship between them, resulting in HMSAA acquiring the School memorabilia and significant financial support. Presented with deepest and most profound gratitude. (Mr. Houser was previously named a Distinguished Alumnus.)

Distinguished Alumnus: Rudy Recile ’86 MAJ, USA(Ret)
In recognition of his years of service to HMSAA as a Director and the Webmaster. Rudy generously donated many hours of time and talent to substantially support HMSAA’s survival through a difficult period in its history.

Special Recognition: Mr. Barry Parrish, Director of Maintenance and Grounds.
This award has been given to long-time School employees. Although history did not allow Mr. Parrish to accumulate decades of service, his dedication to property maintenance during the last years of the School’s operations enabled those last years to occur.

Honorary Alumna/Alumnus: COL Thomas Tate, Ed.D., USA(Ret).
COL Tate served as Howe’s last Superintendent (President). Despite his herculean efforts, the ship was already down by the stern and could not be saved. COL Tate managed to arrange funding which enabled the Academy to complete its final 2018-2019 school year according to its long traditions. COL Tate noticeably raised the overall quality of the Academy during his tenure, including especially the quality of the Academy’s relationship with HMSAA. His administration raised the academic standards of the graduating class. His guidance enabled Howe to end much more graciously than did many other former military academies.

The sumptuous dinner was catered by the Howe Restaurant (yes, they deliver to Michigan). The roast beef and baked chicken were superb. The alums then moved to the club bar for a pleasant evening of reminiscing.

Sunday morning a few gathered in the Alumni Club for doughnuts, coffee, and juice, and happy farewells. Your Association Board decided to sell some of the Cadet courtside chairs. They are $100 each, or $75 each for two or more. Please send orders to alumnioutreach@hmsalumni.org 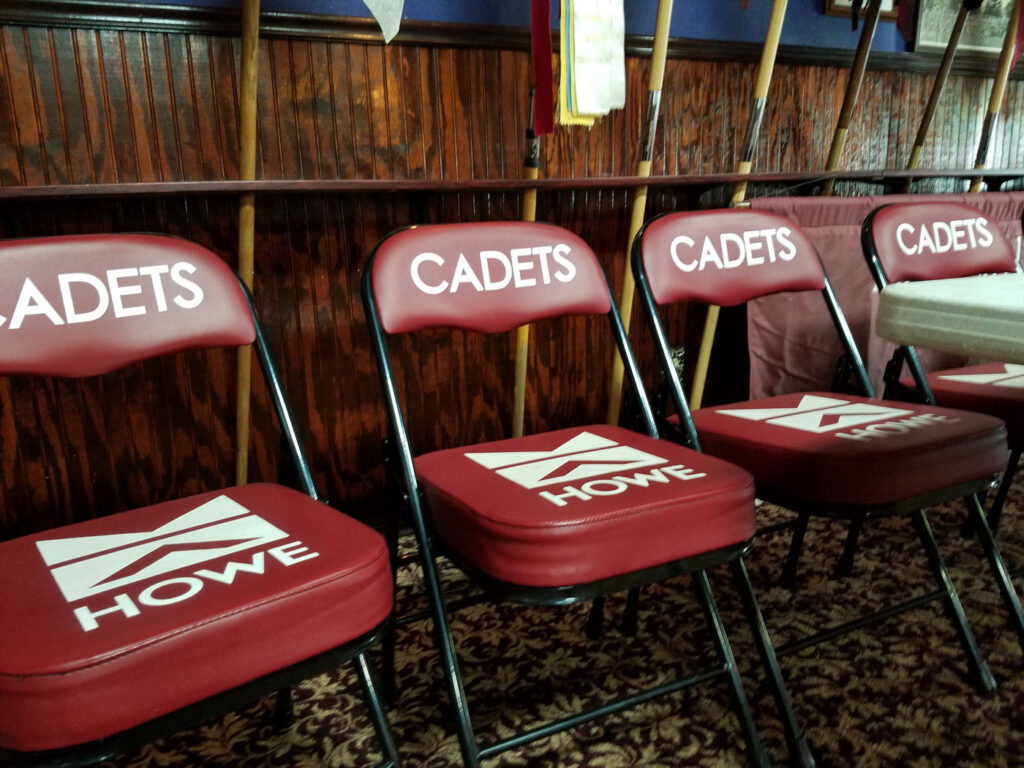 Remember, these Association activities are made possible by your donations. Please go to the Donate page of our website and be generous. If you have made a bequest to Howe Military School, please be advised that The Howe School, Inc. (corporate name) has been dissolved and no longer exists. Please update your will or trust to name Howe Military School Alumni Association, Inc., as beneficiary. It is an Indiana not-for-profit 501(c)(3).

Thank you for reading this.